Quebec City is a great place for sketchers as we have a lot of stuff to draw.  It’s the same stuff that tourists point their cameras at, snapping endless photos, hardly taking the time to actually “look” at anything.

One thing that has always baffled me about Quebec City, however, are the statues.  We have statues of EVERYBODY.  Gandhi, Churchill, Japanese Emperors, what seems to be every South American general that ever lived – EVERYBODY.  Why this is I can’t fathom a guess.  More odd is that there are many prominent Canadian and Quebec historical figures who don’t have a statue.  Go figure.

Anyways, the members of our group decided we were going to draw Confuscius.  Yep, we’ve got a statue of him.  When we showed up, it was decided that it would be best to wait an hour or so for the sun to move and maybe, just maybe, we could get some contrasting shadows.  As it turned out, we didn’t have enough sun to make a difference but that’s how street sketching goes sometimes. 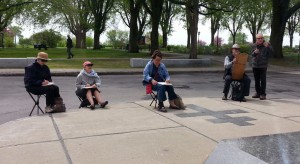 The group decided to draw De Gaulle (yep…got a statue of him too) but I wasn’t interested.  Instead, I wandered around the area and never did get inspired, probably because all my buddies were huddled around the De Gaulle statue. 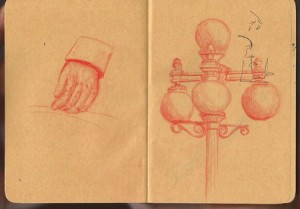 Ultimately I returned to find them about half done with their sketches so I sat down, got out my doodle book and started drawing his hand, which I did poorly.  Then I started drawing a lamp and did so until everyone was ready to move on.

These doodles were done with a Pentel Kerry 0.5mm pencil with Faber-Castell red lead.  This lead is less pink than most others I’ve tried and I really like how it looks.  The brown paper is in the cheap ‘mustache’ books I talked about recently.  I’m really enjoying those but have only found them in one of our dollar stores.  Not sure what’s up with that but I now own a dozen of them.  I’m a shameful notebook hoarder.  Oh…sorry about those black marks.  I guess I was testing a pen or something as those marks were there before I started drawing on the page.  These are doodles, after all.

On to Confucius.  Surprisingly, he was waiting for us, with the same pose as when we left him.  Statues are like that.  We all set up on the sidewalk across the street from him and started making marks.  Sketchers always have the same pose too.  This was my effort.  Thanks to Confucius for standing still so long. 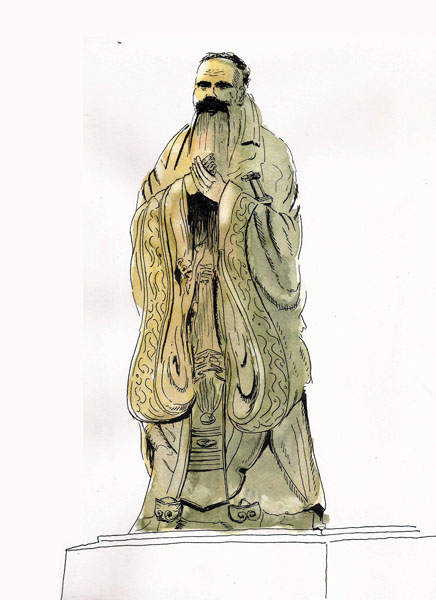 4 Responses to “Why Is Confuscius In Quebec City”