This is the time of year when I wander the streets, sketching whatever turns my head.  This year has been weird as while typically ‘hot’ is the watchword, this year there are many days when I find myself wishing for a jacket.  Today was one of those days.

I came across this odd building in the St. Roch area.  Clearly there has been a patchwork of additions to the structure over the years.  The principle entry is on the other side of the building and it appears to be a bed and breakfast place now.  All the peaks on the roof made it a fun subject.

When I finished I headed downtown and sat in one of the small parks to each lunch.  I’m a tourist watcher of the first order, a trait I acquired early on when it was the only way I could hear people talking in a language I could understand. 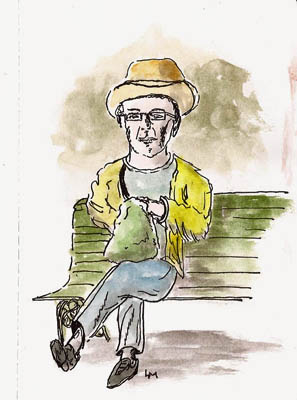 As I ate a very small man sat down on a bench near me.  He had on a hat that was far too large for him and this reminded me of sketches I’d seen just that morning.  They were in Lapin’s newsletter which presented several sketches of people, drawn with heads much larger than normal, dwarfing their bodies.

I decided to try it with this guy while doing a quick sketch of him.  I failed miserably as while I did make his head larger, I didn’t make it large enough to pull off the style.  It just looks like I drew the head a bit too large, which, I guess I did.   Oh well, turn the page and move on.  I include it here only because I do a lot of quick sketches and rarely post any of them.

5 Responses to “Wandering The Streets”