Hundreds of tourists walk by this hotel every day and I’d guess that most don’t even notice it.  The building is rather plain, built from large gray blocks.  But there is something about it that has always intrigued me.  I think it was its sketch potential.

We’re nearing the time that cold starts to limit the days we can sketch outdoors so I decided to put on an extra coat and sketch the Hotel de l’Esplanade.  I was sketching with Claudette and she went hunting for her prey while I got started.  I mentally zoomed in on the entryway to the hotel and went into the zone so the gnomes that rattle around in my brain could do their thing.

By the time I finished the ink drawing I thought it was time for me to see what Claudette was up to so I didn’t add color, but I did take a few photos for later reference. 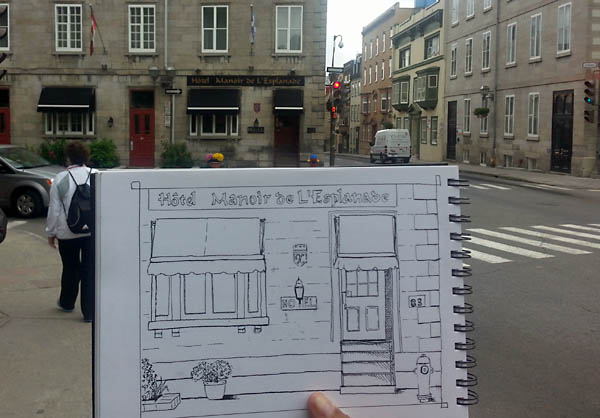 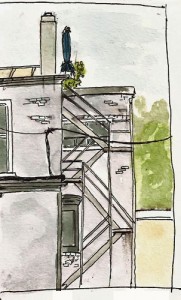 When I found Claudette she was immersed in detailed sketches of door carvings and fancy door knobs.  Not wanting to disturb her I looked around for something I could quickly sketch while she was finishing.  I chose this back alley scene, with too many railings to be done in the 3×5 sketchbook I was using.  But it was fun and kept me warm while I waited.

By this time we were both pretty cold and the desire for something warm to drink caused us to think of little else besides coffee.  It was a great day, in spite of the cold.

When I got home I decided to add color to my sketch so I popped up the photos of the hotel on the computer and went to work.  This was the result.  Hope you like it. 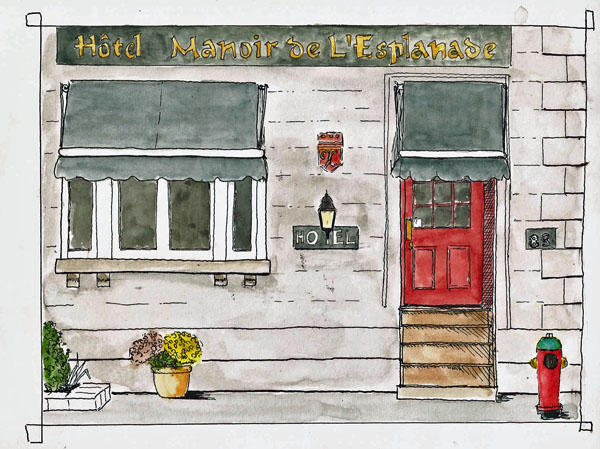 4 Responses to “The Hotel de l’Esplanade”