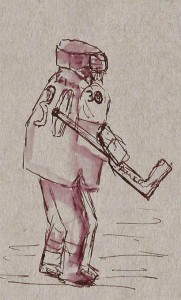 We’re lucky in Quebec City.  Every year we host the International PeeWee Hockey Tournament.  Kids come from around the world to spend 10 days playing hockey and walking around saying “Bonjour” to everyone because it’s the only French word they know.  I know the feeling. 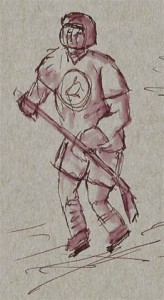 We live down the street from one of the two venues where the tournament takes place and I was shoveling snow when one such group walked by my house.  Several of them used their one French word but one kid said, “We really like your snow.”  They were from Maryland.  When I said, in English, “You can have all and I’ll help you load it,” I swear a couple of them jumped off the ground. 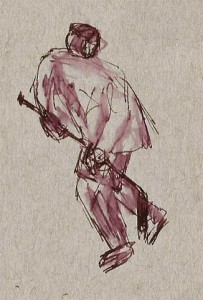 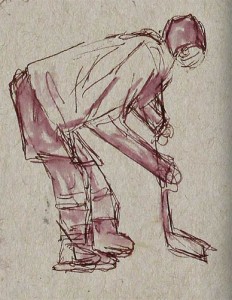 But this post isn’t about hockey, Pee Wee or otherwise.  It’s about sketching.  But it’s not about the sketches I’m presenting either.  Rather, it’s a post about the evening I spent with my family and thousands of hockey fans.

My habit of sketching every time I stop moving found me sitting among cheering fans, watching hockey and sketching, trying to create quick hockey player sketches by jumping from one player to another to grab a complete outline.  I’d never done that before and the results show my lack of experience with the technique.  But it was a LOT of fun and when the dust settled, I’d done eleven pages (5.5×8.5) of the darn things. 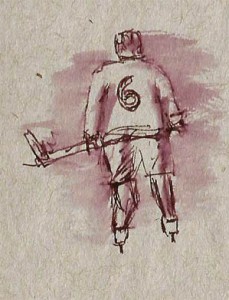 Ok…so if the post isn’t about hockey, and it isn’t about sketches, why are you reading this, you ask.  I want to tell you a couple short stories about my interactions with some of the spectators.  Too often I hear people say they are too shy or not good enough to sketch in public.  These two stories, I hope, will convince you that none of that matters and that people LOVE sketchers. 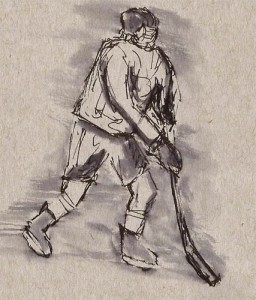 The first story begins between periods during the second game.  The players has just returned to the ice and I was sketching, as I had been for the past couple hours.  There was a very gentle tap on my left shoulder.  I turned to find it had come from the finger of a young girl, probably no more than 12-13 years old.  She very shyly said, “Do you speak French?”  I guess she’d heard me speaking English.  I told her yes and she immediately looked up a couple rows and waved. Another young girl jumped up and ran down to us.  “Hic c’est beau!  J’aime beaucoup vos esquisses,” (I think) immediately came from her and she asked if she could see all of my sketches.  Of course I complied, sheepishly showing her these crude sketches as she went on and on about how great they were.  I showed her my pens, my waterbrush, and how I used the waterbrush to shade the sketches.  They were thrilled; I was chuffed.  Nothing like an appreciative audience (grin).

At the end of the second game I got a cup of tea.  The food vendor lady ‘made’ me a tea, stuffing a tea bag in a styrofoam cup full of hot water.  I guess she was more used to people ordering coffee as she said, “I don’t know how to make tea.  If it’s no good I’ll give you your money back.”  I just smiled.  Quebecers are so nice. 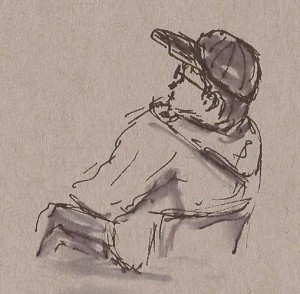 As there were no skaters on the ice I did a quick sketch of the Zamboni (ice cleaning machine) and then decided to sketch a guy who was sitting a couple rows below me.  Again, it was just a quick sketch, but at least he wasn’t in constant motion.  I was nearly finished when I got a tap on my shoulder.  This time it was a great big guy who was sitting behind me.  He asked “Are you drawing that guy down there?” and he pointed at the guy I was sketching.  My immediate thought was “Oh crap, I’m in trouble now”, but I admitted that I was.   I didn’t dare let on that I didn’t think it was even close to a likeness as he obviously saw something I didn’t.  He said, “That’s what I thought.  He’s my friend,” and he stood up and yelled, “Marcel, viens ici”  Marcel turned around, got up and came up to where we were sitting.  I showed him the sketch, he told me it was nice, the two friends kibbitzed a bit and he returned to his seat, and I did a quick shading of the sketch.

Sketching on location is special, even if nobody talks to you.  But when they do, it’s really special.  I’m convinced that there are people in the world who think my sketches are horrible and a waste of time…but they never talk to me.

8 Responses to “The Hidden Fun Of Urban Sketching”