Last Wednesday several of us drove to St. Vallier at the invitation of Louise Denault, one of our sketching buddies.  This was very exciting because St. Vallier is a beautiful place, with a wide variety of sketching locations. 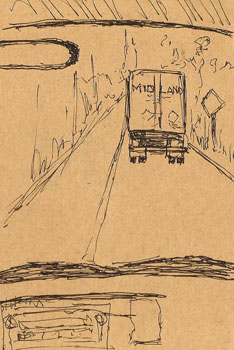 I took advantage of the fact that, for once, I wasn’t driving and so I did some quick sketches along the way.  The bumps in the road added to the scribbly nature of the sketches but it was fun anyway.

We picked up Louise at her house and headed to a side road overlooking the valley and its agricultural fields.  Everyone set up next to a wheat field with the expanse of the valley behind it, but I walked down the road to sketch an outbuilding I’d seen as we arrived. 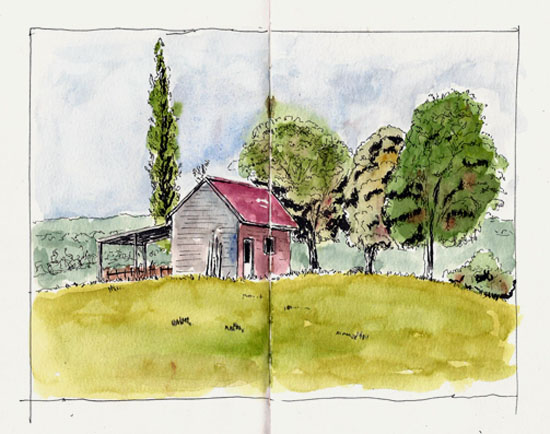 Claudette and Louise came to where I was sketching just as I was finishing and we walked back to the group together.  It had been determined that it was time for lunch and that we would head back to Louise’s house for lunch.

As everyone else was packing up I looked out at the valley and decided it would be an opportunity to do another one of those one-line sketch drawings and so I did one.  I did ‘cheat’ a bit and lifted my pen a couple times to keep the drawing a bit cleaner, but by the time everyone was packed I’d done the sketch, added some darks, and was slopping paint on the piece of cheap Bristol on which I did it.  I mention this last thing because it was a mistake.  I thought I’d grabbed a piece of watercolor paper but instead I was trying to herd water on a piece of slippery, coated paper and I was using a waterbrush to do it.  That was exciting.  But this was a few minutes of fun and the result isn’t horrible (grin). 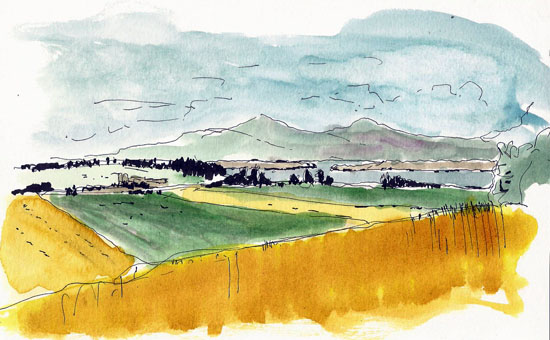 Lunch was to die for, and if I’d eaten one more bite that might have happened.  Louise provided quite a spread, with a beautiful salad, lots of cheeses, smoked sturgeon, quiche, baguettes, and wine… lots of wine.  I was stuffed.  And then Louise mentioned the pies…two pies.  And, of course, we had to try both of them 🙂

Louise’s house is amazing but it’s the backyard, with its gardens, gazebo and view of the St. Lawrence that is the real jewel and we were eating in said gazebo.  I’m used to a protein bar and a coffee when I go sketching.   This was different, a really good kind of different 🙂

And now that we were done with lunch, it was time to get out sketching again.  So, barely able to move, I left the gazebo completely delier, my new French word for the day.  It means to be loosened up, and boy, was I loose.  Any looser and I would’ve fallen down.  I needed a nap.

Off we went, to a small nature park not far from St. Vallier.  It was a parking lot, picnic tables, some trails and a gazebo set up for bird watching along the coast.  Most of us decided to draw the gazebo.  Here’s mine. 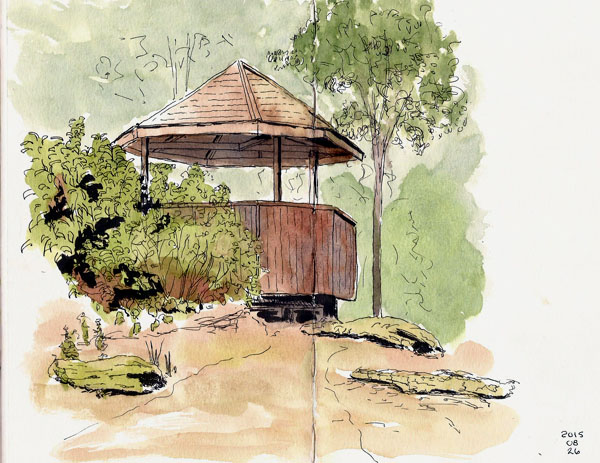 It was a great day but by then we were all pretty worn out and called it a day.  Thanks to Louise for all her hospitality, her zucchinis, and that fantastic lunch.