We’ve all heard of and been told to do single-line contour drawing but generally this is done using a single object as subject and the goal is to gain “hand-eye coordination”, whatever that is (I do want to talk about this  some day).

It presents three approaches to street sketching.  The first is to do a pencil framework, followed by “expressive ink”, ending with the addition of shading using a brush pen.  While not exactly my approach, this is close to my drawing approach and thus I feel it’s a really good idea (grin).

Marc’s second method is a quick-sketch approach, working small (4×6) and doing sketches in 4-minutes or so. The goal of this exercise, says Marc, is to “help you develop fluidity and confidence with spontaneous pen-and-ink sketching.”  He does establish the caveat that “This probably won’t be easy at first – but that’s ok.”  For a guy who squeezes his pens within an inch of collapse when I draw (overstated here for effect), this was quite a challenge, and one I have taken up recently.

This post is a quick report of my early baby steps in single-line sketching.  All of these drawings were done on 5.5×8.5 paper so each is about half that in size.  I used my Namiki Falcon for the single line and a Kuretake #13 brush pen for the darks. 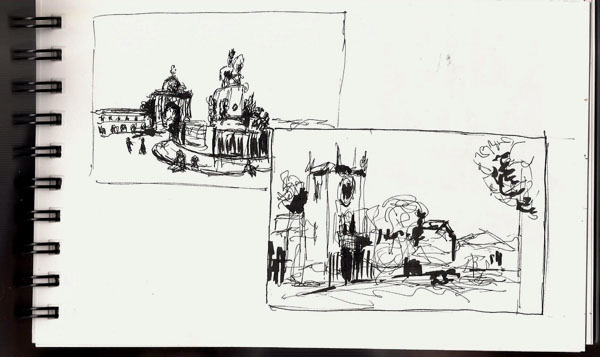 This first one is a bit of a cheat.  Marc provides two thumbnail photos and examples of his single-line sketch of each.  I used those photos as a source and tried to do single-line sketches in five minutes or less.  I think I accomplished the task but they’re not nearly as neat and clean as the ones Marc did.

I found the process frantic, frustrating, impossible, and hard.  Much of the frustration came from trying to plot out my ‘next’ move to get from one place to another in the drawing.

The impossible came from elsewhere.  In the few years since I started sketching, I’ve barely managed to wrestle things like proportion, perspective, and volumes to the ground using a scaffolding, outside-in approach, that Marc certainly advocates.  All of that fell apart for me when I tried to do this exercise because I was starting in one place and moving across the scene, trying to cobble it together as I went.  Didn’t much like that at all.  On to the next. 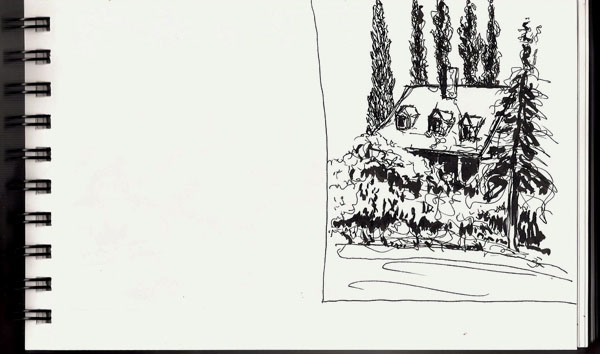 This is a house, nestled in a forested area near my river.  I was out walking after a rain and decided to do the single-line thing.  There was no place to sit so I had to deal with my other big weakness – I have a hard time drawing on a sketchbook that I’m holding.  Just can’t get the left and right hands to organize themselves.

Here you can clearly see what I meant by losing all the proportion/perspective stuff.  My gables are almost randomly placed on the roof and the third one in the row looks like the runt of the litter as it’s not nearly the right size.  But it was fun and I do get a sense that this exercise is feeding me in some way so I shall push on. 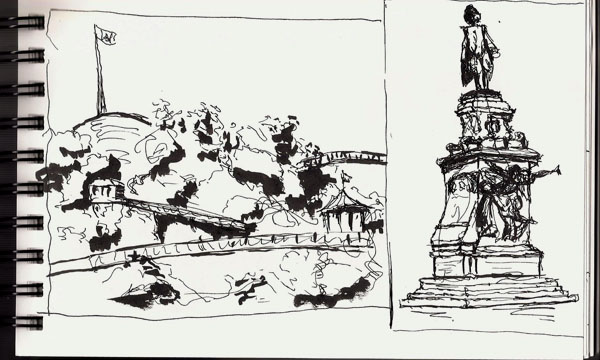 The sketch on the left is an impossible (tough?) subject because it was done from the ferry and looks up at a scary steep angle at the bit of the military fort that looks out over the St. Lawrence and a long terrace railing that runs across this scene.  While it took only a few minutes I learned several things.

1) I’m not very good.
2) I’m easily confused.
3) It’s hard to deal with multiple layers of foliage with a single line width and worse with a single line.
4) Without shade and texture, it’s often hard to separate nature from man-made objects.  For instance, there’s a wall below the long railing running through the drawing, with trees sticking up in places.  The “bridge” you see in the upper right is really another railing that runs along the edge of a park.  Below it is actually an open, grassy area.  How to indicate this in a single-line drawing ??????

The second sketch was a mass of the frustration stuff, where all my brain power was shoved towards figuring out how to get from one form to another and the result was a ton of spurious twists and turns that simply cluttered things up a lot.  Another thing that caused a problem here had nothing to do with me or Marc’s exercise.  I’d spent a couple minutes on this sketch when this appeared in front of me. 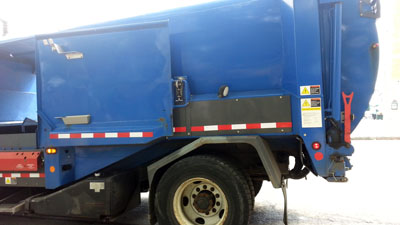 Needless to say, this disrupted the flow a bit and I admit that I raised my pen off the paper.  I had to stand up and move to the right to finish the sketch, faking things a bit because of a POV change.  Tis the nature of street sketching. 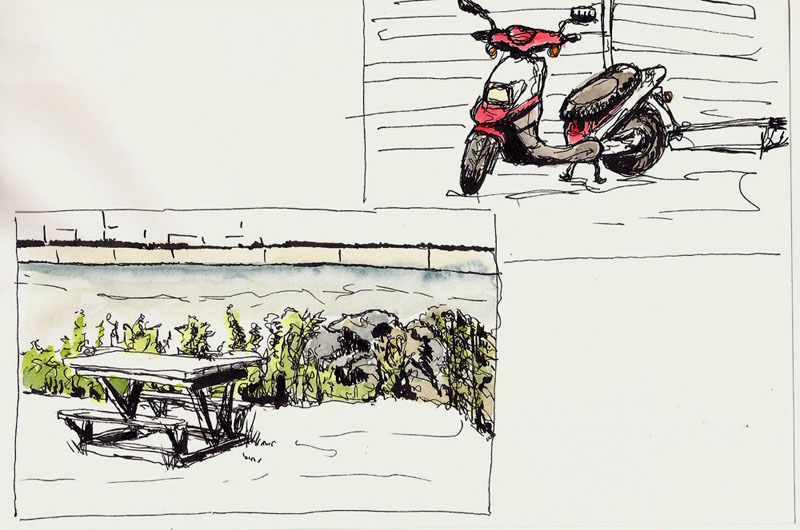 I made some changes to my approach.  First, I “planned” these little sketches.  I did this by dropping some dots in places to indicate edge/corner locations.  Maybe it’s not “fair” but geez…  I’m just an outside in kinda guy at this point and it’s nuts to me to try to draw right to left (I’m a lefty) like some sort of tidal wave sweeping across the page.

In the case of the foreground squiggles (picnic table) and the background building siding (scooter sketch) I did add those after I’d completed the single-line part of the exercise.  Truthfully, those background siding lines were done so quickly and poorly that they detract, rather than add to the sketch.

I also decided to add a bit of color mostly to see what happens.  I liked the result, in spite of the wonky nature of the sketches.  Mostly I LOVE the idea of being able to do such things in a very few minutes.

I’ve done several more of these but I won’t bore you with them.  Besides, it’s probably not good to show too many of my training exercises 🙂  You know the old adage, “Never let them see you sweat.”  Well, I was sweating while trying to do these single-line sketches.

For someone who can already draw stuff, at least in my limited way, I found this exercise to be very hard, almost jarring, as it flies in the face of my more cartoon style.  And this is probably it’s biggest virtue for me.  I’m a believer in training one’s self to be able to do a drawing in 30-seconds, 2-minutes, 20-minutes, or over several hours.  By doing so one is best adapted to capturing what one sees on the street and it makes it far easier to fit sketching into your daily routine.  You can’t do much sketching if you always need a couple hours to do it.

From a ‘technique’ point of view, I think this exercise is helping me “loosen up” as they say, but I don’t see that as a big deal.  Loose or tight, the goal is to capture the subject such that people can recognize it in the sketch.

No, for me I see the value of this is to train my eye in a different way.  In an attempt to eliminate a lot of the scribble nature of these sketches I’m moving to simplify shapes, to be able to more quickly recognize the importance of objects relative to others.

A big thing this method can teach, though I’ve yet to learn it, is that drawing quickly doesn’t have to mean, nor should it mean, drawing fast.  My early attempts here had my pen moving a lightning speed, far faster than my brain could manage.  The result was a lot of scribble that 1) wasn’t needed and 2) made for a lesser result.  Learning to slow down while doing a 2-4 minute sketch may be as important as anything else in the sketcher’s arsenal.

For me it’s now on to Marc’s next step, drawing larger and using 5-7 lines for the same sort of sketches.