I was talking to a sketching buddy and he asked “Do you know about Parchemin du Roy?”  I said no and he told me about a place that sold pens, sketchbooks, and pencils that he’d recently discovered.  To say my interest was peaked was an understatement.  That was a Sunday.

And so on Monday I hoofed my way to Parchemin du Roy, about a one-hour walk from my house.  They were closed, so like a kid in front of the toy shop, all I could do was put my nose to the glass and look in.  And what a view.  I left with the resolve to return. 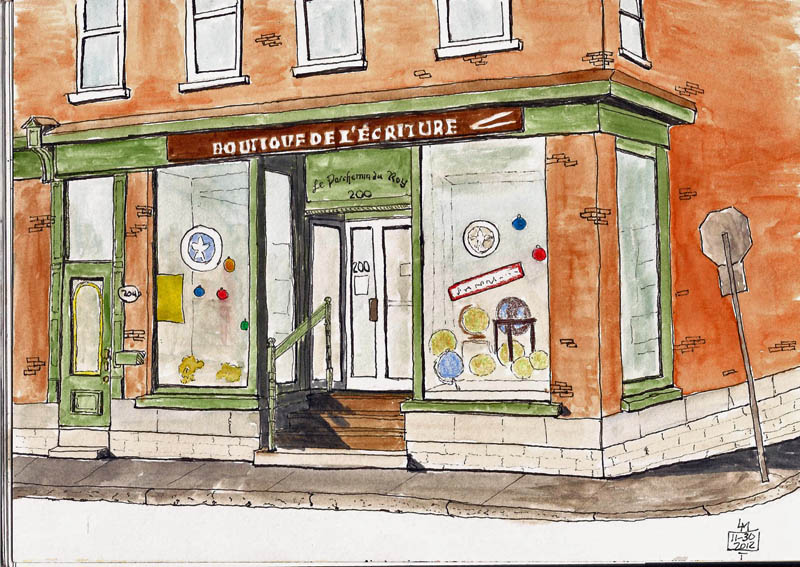 And so I did.  It’s not very manly to jump up and down while giggling so I controlled myself, almost, as my eyes beheld the interior of this store.  Inks, pens, books, papers, sketchbooks, notebooks, maps, pencils, watercolors, brushes, and lots of other wonderful items to look at and touch.

Maybe more important, is that while they have the more typical Paper Blanks, Moleskine, and Rhodia products, they also have some really nice high-end speciality paper products.  Not only do they have J.Herbin and Pilot/Namiki inks, they’ve got walnut inks and specialized calligraphy inks.  In addition to Brause dip pens, they’ve got handmade dip pens turned from hardwoods.  While they stock Lamy pens and all their accessories, they also have the new Shaeffer “Ferrari” pen.  Yes, I admit it.  I did giggle and I jumped up and down a little.  I hope Roy didn’t see me.

They offer workshops in calligraphy and you can learn to create illuminated pages.  I might have to take one of those.  For my first visit I bought a brush, notepad and mechanical pencil.  I talked with Roy about differences between Parker and Waterman ballpoint cartridges and I looked and looked – and then I looked some more.  I’m still a bit giddy from the experience.

As I left I took a couple photos (it was too cold to sketch outdoors) and ran home to do the sketch I’ve shared above.  I hope you like it.  Do you have a specialty store like this in your town?  I’m so lucky.

I’ve just finished my first summer as a “plein air” sketcher.  I so passionately wandered the streets of Quebec City with a sketchbook that I’ve not spent enough time reporting on those activities in this blog.  My productivity as a writer has been excruciatingly close to zero.  But I have had sooooooo much fun this summer.  Sketching has changed my views of everything.

Like squirrels gathering nuts, we run around this time of year, preparing for our own hibernation in warm, cozy huts and with the exception of a few crazy people who like to ski and skate, we see “outdoors” only when forced to shove a snowblower around the driveway.

But, with my new found hobby, this is unacceptable.  I want to sketch.  Yes, I can draw coffee cups and sofas but that’s not who I am.  I like sketching places.  So, how do I get past the reality that watercolors freeze when subjected to Quebec City winter temperatures?

Clearly the watercolors will have to be left behind,  but a pen and a small sketchbook can be crammed into a coat pocket.  I’ve got small versions of Stillman & Birn’s Alpha series sketchbooks on their way.  I may even move from my favorite fountain pens to a gel pen or…shudder…maybe even a pencil, to simplify the toolkit.

I’m excited.  As the leaves fell from the trees, my stomping grounds have revealed a whole new landscape, just waiting to be sketched, with or without color. 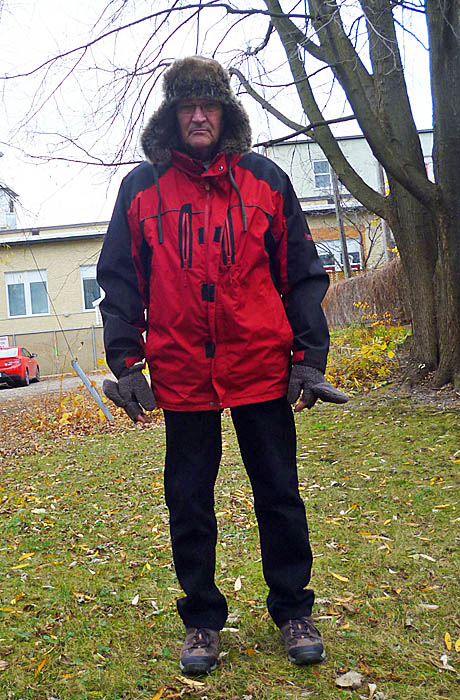 But, can an Arizona-bred old guy sketch in the cold.  We’ll see, but I’m optimistic.  Is this how a well-dressed sketching fanatic faces temperatures that live around zero degrees Fahrenheit?  Hope so.

I think the sessions will be shorter, and they’ll probably followed by warming myself over a hot cup of tea, but I’m optimistic.  Then again, it’s still “warm” here.  The  following photo was taken last weekend as I sketched on the large island next to Quebec City.  It was 35F.  If nothing else, winter will help me sketch faster (grin).  What do you do to feed your sketching itch when winter rolls around?  Am I nuts? 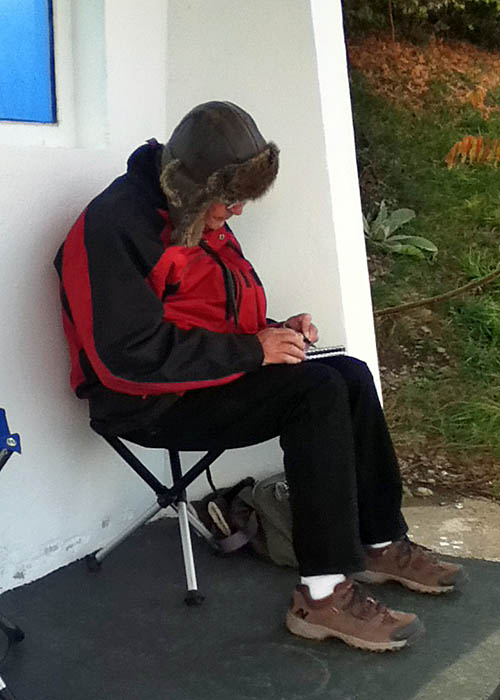 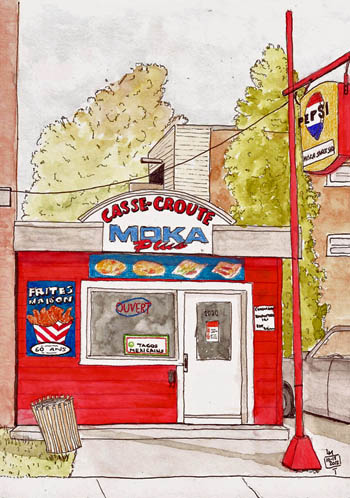 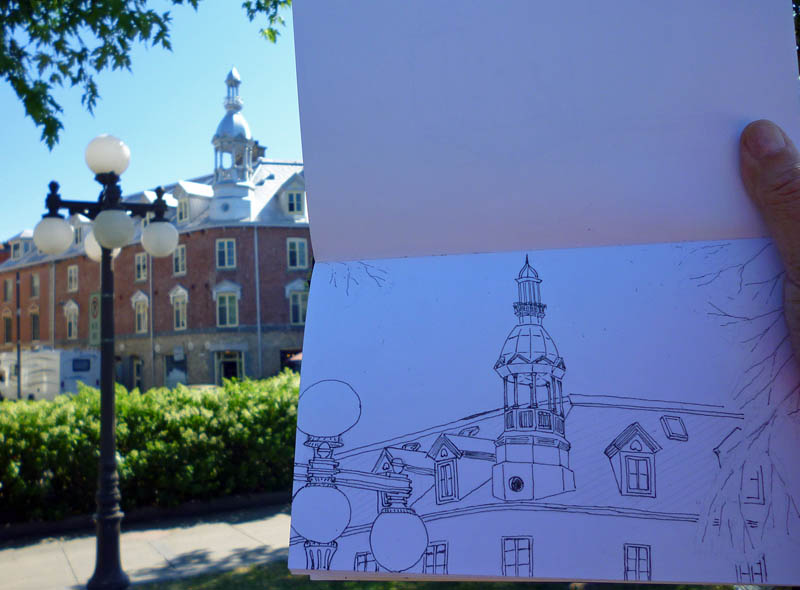 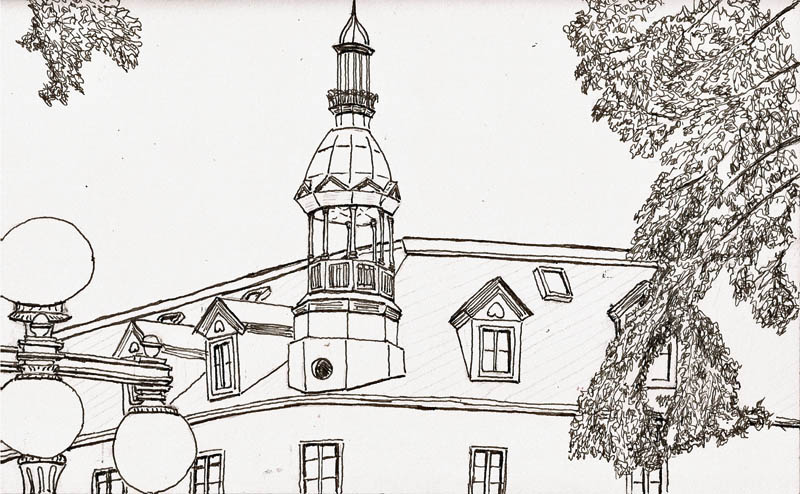 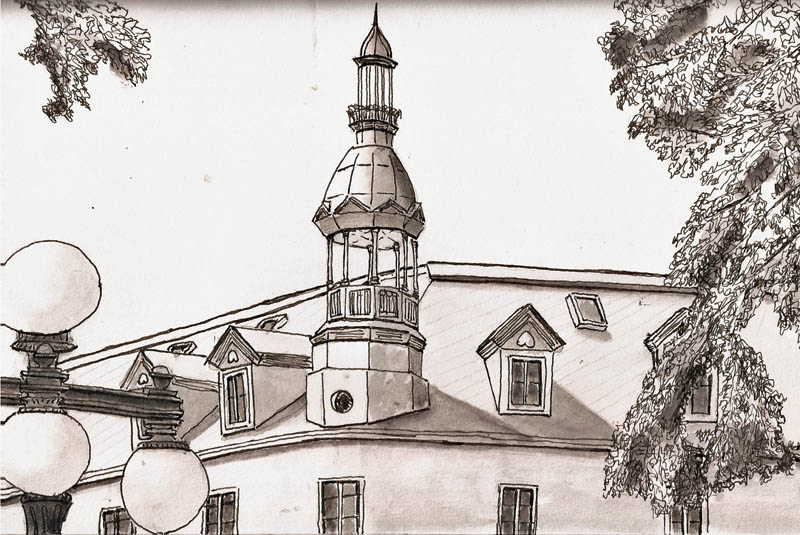 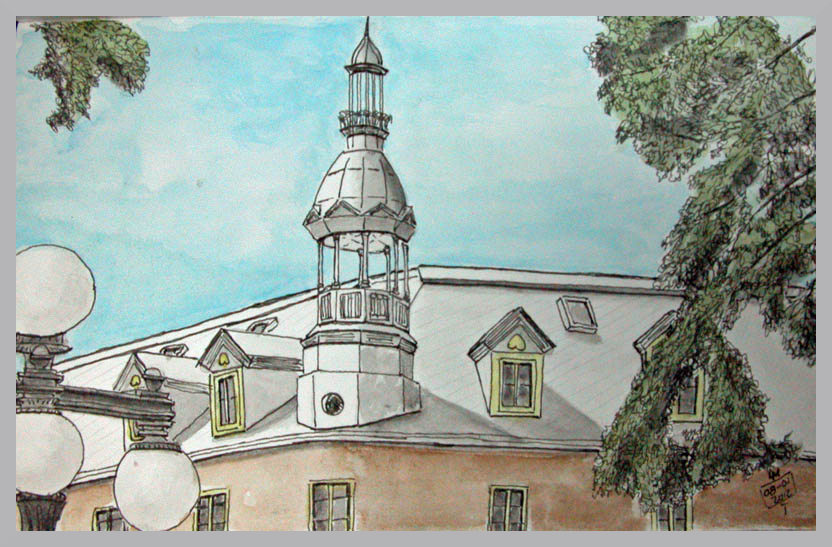 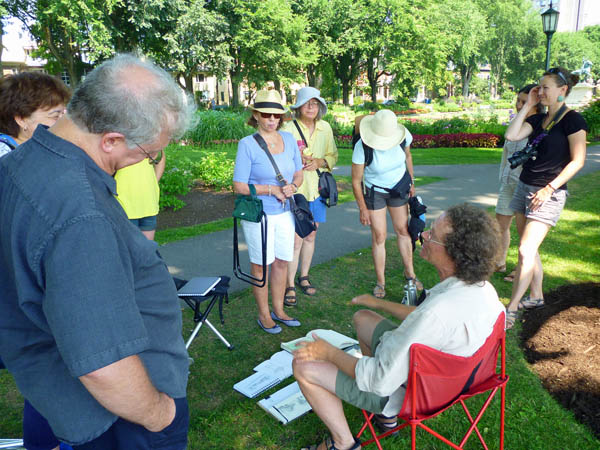 Last Saturday I and a group of more talented sketchers took to the streets of Quebec City as part of a worldwide “sketchcrawl”, to spend the day sketching our fair city.  I could tell you all about it.  I could show you pictures.  But that’s already been done better than I could at the Drawn to Quebec blog so click thee to the photos and discussion.