Yippee!! Stillman & Birn’s new Zeta series sketchbooks have been released.  Double-yippee – mine was plopped into my mailbox this morning. 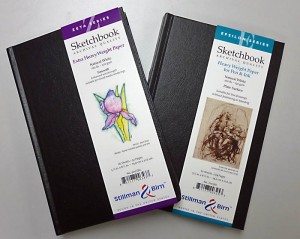 I’ve been using Stillman & Birn sketchbooks since December 2011, when I bought my first Alpha series sketchbook.  I rarely brand any product ‘best’ as, for me, product choices shouldn’t be spoken of in that way.  Stillman & Birn is my one exception to that view as they are simply the best.  While I still experiment with pens, inks, and even watercolors, I no longer buy any sketchbook that doesn’t have Stillman & Birn embossed on the its back.

Mostly I have used Alpha series sketchbooks.  I have 4×6, 5.5×8.5, and 9×12 hardbound and 10×7 spiral bound versions of this series and several of them rest, full of sketches, on my shelves.  I’ve also filled a 6×8 Beta series sketchbook, which is its heavier-paper counterpart. 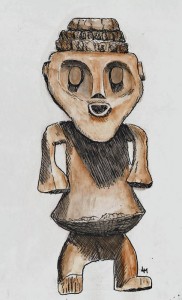 This winter, however, I started using a 5.5×8.5 Epsilon series book.  I’ve had a 9×12 version of this series on my desk for a long time and use it as my learning platform as I can do a lot of small sketches on a single page when trying various techniques.

If you’ve seen any of my museum sketches (eg – Samurai helmets, Nigerian masks and statues), you’ve seen the results of ink and watercolor pencils on Epsilon paper.  Here’s my latest sketch in my current Epsilon 5.5×8.5 sketchbook.  Epsilon paper is simply awesome for ink and wash as the paper is very smooth and double-sized which makes the watercolors remain bright.  I just love the stuff.

So when S&B announced that they were going to create Epsilon-like paper in their heavier, 180lb format, I got very excited.  While the 100lb paper of the Alpha and Epsilon papers are more than up to the task of accepting my watercolors, there are times when I want to play with wet-in-wet in a bigger way and the 180lb papers are just amazing for such purposes. 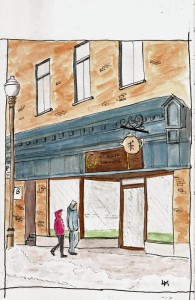 Here’s the first sketch I did on this paper.  It was done rather quickly as “spring” in Quebec is still pretty cold so it’s not as detailed as most of my building sketches.  It’s a sketch of my favorite tea store.  I’ll be showing you more sketches on Zeta paper ‘real soon’ as it should start warming up in the days ahead.  Thanks, Stillman & Birn for making my sketching life easier.