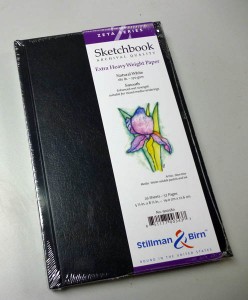 Back in November of 2011 I bought my first Stillman & Birn sketchbook.  It was a 5×8, hardcover Alpha-series book.  I wrote about the Alpha Series here.   In that blog post I said that I liked it very much and I gave several reasons why I felt it outperformed the other sketchbooks I’d tried. I also ran out and bought several more.  But as I’d only had it for a short time I added the caveat that “It’s probably premature to draw conclusions that will stick.”

Well, nearly two years and ten S&B sketchbooks in use or filled, I think I can be a bit more definitive…but with another caveat.  Stillman & Birn just keeps getting better and better so who knows what ‘best’ will look like in the future. 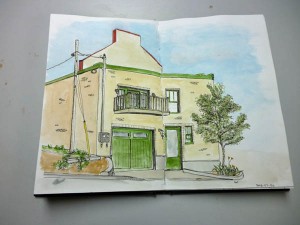 I find the colors are brighter on Zeta paper, probably because they aren’t absorbed into the paper as much. Makes lifting easier as well.

As I filled sketchbooks, I tried the other Stillman & Birn papers.  For the pen & ink work I do, the Epsilon sketchbooks are wonderful to draw on.  It took me a while to get used to how the smoother paper accepts watercolor as they stay wet longer and sit on the surface more, which is neither good or bad but different from the more absorbent Alpha.  The best equivalency I know is to the differences between cold-press and hot-press watercolor papers. Both of these papers are 100lb papers that, while they outperform any papers of this weight I’ve ever used, they still have a tendency to curl somewhat when lots of water are applied.  You can see a bit of shadowing if you use both sides of the paper.

And then I tried Beta, S&B’s 180lb paper.  This is surfaced very much like a cold-press paper and provides a fantastic surface for watercolors but not as nice as Epsilon for pen use.   By the end of the summer of 2012 I wrote a summary post on these different sketchbooks.  I was completely hooked on Stillman & Birn papers and their amazing double-stitched bindings which are second to none.  But at the time I thought “They need thick “Epsilon” paper. 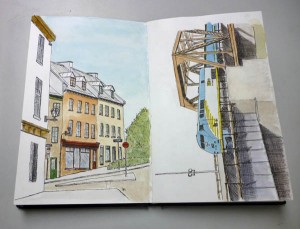 Notice how flat S&B Zeta sketchbooks lay once they’ve been broken in.

And this is the thing about Stillman & Birn.  If you dream it, they magically know you were dreaming and they make it.  The Zeta sketchbooks were release a few months ago in response to my dream.  I’m betting others were dreaming the same thing.

I use several S&B sketchbooks (different sizes and papers) simultaneously and when the Zeta series was released, I immediately started using one.  It quickly became a favorite for my kind of sketching (pen/ink and wash).  It’s a merging of best of Beta and Epsilon into one paper as it’s 180lb Epsilon paper.  I’m working in my second Zeta sketchbook and it’s hard for me to see any reason to use any other, if the size I want is available with this paper.