When I got interested in sketching I found it pretty easy to find good watercolors, brushes, pencils, and pens.  What was harder was finding sketchbooks that served my purposes as a pen/ink/watercolor sketcher.  I spent a lot of money and now own a bunch of sketchbooks with 2-3 sketches done in each before I rejected them.

Then a couple artists started talking about Stillman & Birn sketchbooks.  I bought one.  Then another.  Then another.  And I’ve never looked back.  They are simply the best I’ve found.  Mostly I’ve been using sketchbooks, both bound and spiral, from their Alpha series, which have nice, smooth, 100lb paper.  I’ve also tried the Epsilon series and while a bit smoother, I don’t really see much difference between the two but I’m a rookie so what do I know.

And over my few months of using them, lots of other sketchers have started using them too.  We’ve all reported to Stillman & Birn that their Alpha (white) and Gamma (ivory) sketchbooks can handle a lot more water/washes than their advertising suggests.  Many of us are as surprised as S&B are about this, as 100lb paper is about the minimum for doing washes in my experience.  But there’s something about the sizing of the paper that causes it to act ‘heavier’ than it is when accepting watercolor. 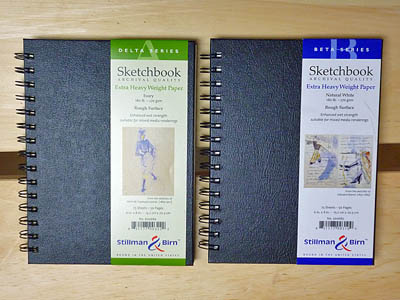 It’s not that you can’t buy heavier paper from Stillman & Birn.  They have a Beta (white) and Delta (ivory) series that contain 180lb paper.  But Stillman & Birn advertise these series as being “rough” paper and that’s the last thing one wants if you’re going to be pushing an ink pen over the surface.  So I’ve avoided them…until now.

I’m a curious kind of guy so I’ve now got 6×8 spiral sketchbooks from the Beta and Delta series and…shazaam…the paper isn’t rough at all.  In fact, it’s smoother than some cold-press watercolor papers I’ve tried.  These papers do have a bit more tooth than my Alphas but I got quite excited when I received them because the paper is very heavy, smooth, and inviting. 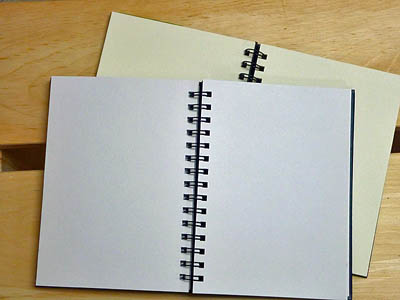 A quick test demonstrated that my fountain pens like these papers.  I tried a Kaweco Al-Sport, Lamy Safari, Noodler’s Ahab, Pilot Prera, and Hero calligraphy pens.  I tried Platinum Carbon Black, Noodler’s Lexington Gray, and Noodler’s Bernanke Black ink.  All the lines were clean and crisp.  It might be my imagination but I feel that watercolor washes are easier to do with these papers too but I can present no data other than ‘seems like’ to support that view.

And so this morning I got up, looked outside and saw the sun.  I headed out with my new Beta sketchbook in search of something to sketch.  This lasted about 15 minutes.  It was sunny, but ugh; it was cold… cold… cold.  Temps were only a couple degrees below freezing but the winds were howling and so being the sissy that I am, I hustled myself back home. 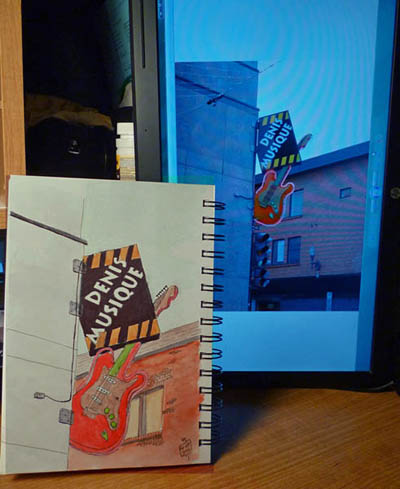 Not to be defeated by Mother Nature, I went through my photo library and came up with a photo of a sign I’ve been wanting to sketch.  It hangs high over an intersection in our downtown area and I love the flourescent pink lighting around its periphery.  I started sketching, not fully realizing that I had no clue how to draw flourescent lighting.

I’m going to really like this Beta sketchbook.  At 6×8 it’s a good size for portable sketching, though I’ve become quite attached to my 10×7 Alpha sketchbooks.  Here’s the end result.  I did this sketch with a Pilot Prera and Lexington Gray ink. 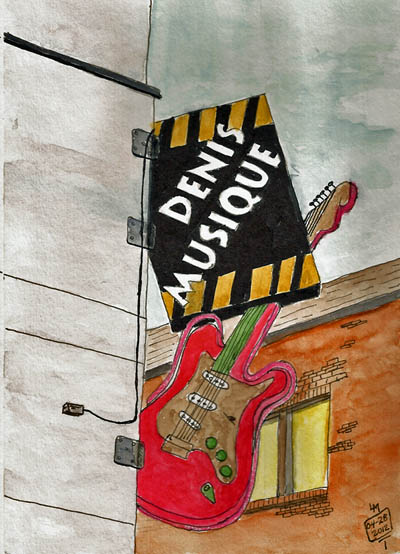