Standing on the corner…
…watching all the girls go by. — Four Lads

I’m old enough to remember a time before rock-n-roll.  It was an era between big band music and Elvis Presley, where pop music came either from crooners or quartets of men or women.  Lyrics were silly, but happy.  Melodies simple and memorable.  When I was a kid there was a song, Standing on the Corner, whose melody caught the attention of this kid.  I must have been six or seven.

As an old sketcher I was standing on a corner and I suppose there were girls walking by, but what I noticed was the light pole and the block wall next to it.  In the background and up the street a bit is where Rene Levesque lived, undoubtedly the best known and most beloved of Quebec’s Premiers.  I did this quick drawing of the scene. 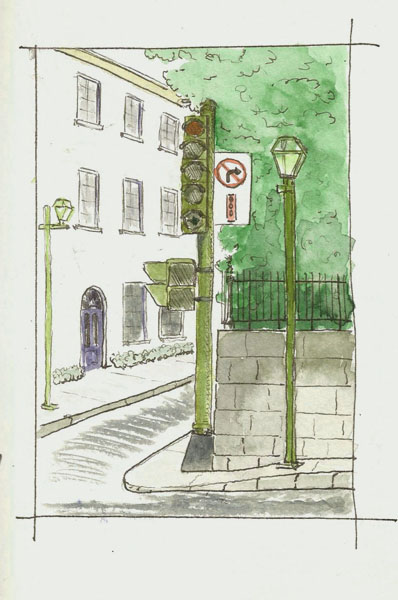