I mentioned in my last blog post (written a week ago) that I was sick.  This flu just won’t go away.  But I was really looking forward to driving to Montreal to sketch at the Redpath Museum with the USK-Montreal group.  I’d never been to the RedPath and it is a museum in the old tradition of large wooden cabinets with glass rather than the more modern all-glass enclosures and it’s stacked to the rafters with everything imaginable, from dinosaurs to Samurais and everything in between.  It was also the case that we’d pre-arranged a family reunion that weekend as my daughter was going to hop a bus and meet us there.

So, while not completely over the flu we pointed the car west and headed for Montreal.  As luck would have it, I’d also screwed up my back such that I could stand or sit, but between those two conditions was excruciating.  It was going to be quite a day [sigh], but still I was excited.

If you just landed from another planet I should mention what most people know, which is that USK-Montreal urban sketchers is organized by Shari Blaukopf and Marc Taro Holmes and because of their great and giving personalities, the group is both large and dynamic.  It was amazing to wander the museum with at least half a dozen sketchers in sight, regardless of where you were or where you looked.  They were EVERYWHERE!

Because I was in less than optimal form I decided to draw stuffed birds that were conveniently housed at my eye-level.  In this way I could sketch while standing and not have to worry about bending over, at least until the cap on my waterbrush dropped out of my hand.  Funny how far away the floor becomes when the flexy bits of your anatomy stop working. 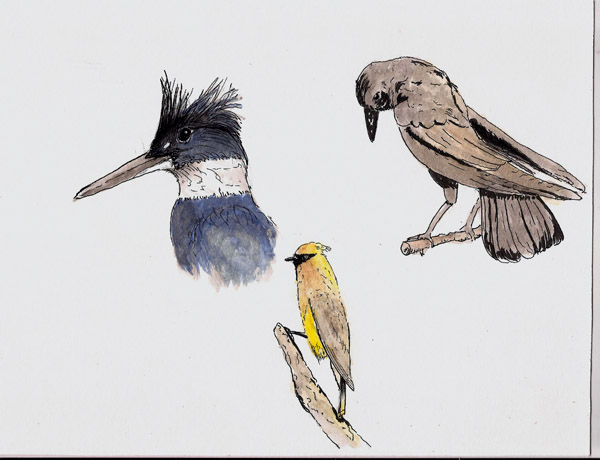 After I finished drawing birds I went to find what my family was up to, and found them in the beautiful shell collection.  They were drawing up a storm but, like me, they were ready for a break.  I really needed to sit down as my back was screaming at me.  So, we went out and got a cup of coffee and  did some family kibbitzing. It had been a while since we’d seen our daughter so that was pretty special. 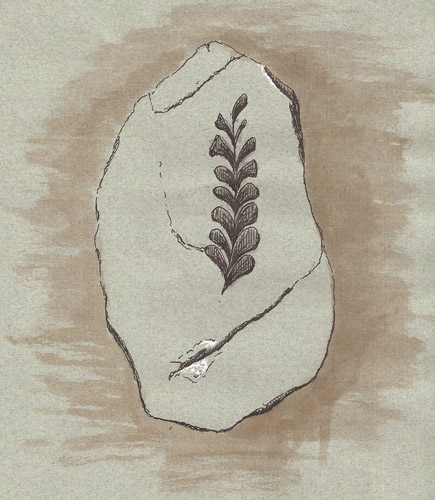 When we returned to the museum I was pretty wiped out.  What I really wanted was a bed.  What I got was a kleenex, some tylenol and then it was back into the museum.  I was a bit sluggish but mustered a small sketch of a rock containing a plant fossil.  Then I just spent some time enjoying the museum.  I really do have to get back there as there is a lot to draw.

I had a nice chat with Marc.  He was doing watercolor sketches, skipping his normal pen work and we discussed the results, which were amazing.  I’ve learned a lot from his courses and it’s really nice to be able to actually talk with him about sketching.  I’m a lucky guy, all except for this darn cold, and my broken back.

2 Responses to “Sketching With the Montreal Urban Sketchers”