As part of the 400th anniversary of the founding of Quebec City, the Fontaine de Tourny was placed in front of Quebec’s parliament building.  I’d like to provide you a concise history of this fountain but, its history depends on who you ask.

The fountain gets its name from two identical fountains that sat at each end of the Tourny promenade in Bourdeaux.  Mathurin Moreau was its designer.  That much is certain.  But some reports suggest that the French government gifted the fountain to Quebec.  A more complete story is that a guy named Marc Maison acquired it when the fountains were removed from Bourdeaux and much later sold to Peter Simons, a Quebec entrepreneur.  It was restored given to Quebec for the 400th anniversary.  Most stories in Quebec suggest there were two of these.  A few admit to the existence of five scattered around the world.  The internet has a way of turning up info on such things and the total has climbed to 19 or 20 of them.  I suspect the foundry wanted to get their money’s worth from the molds (grin).

What I do know is that it’s a magnificent fountain, towering some 21-feet in the air.  I was with Claudette and Yvan while drawing this one and we had a great day. 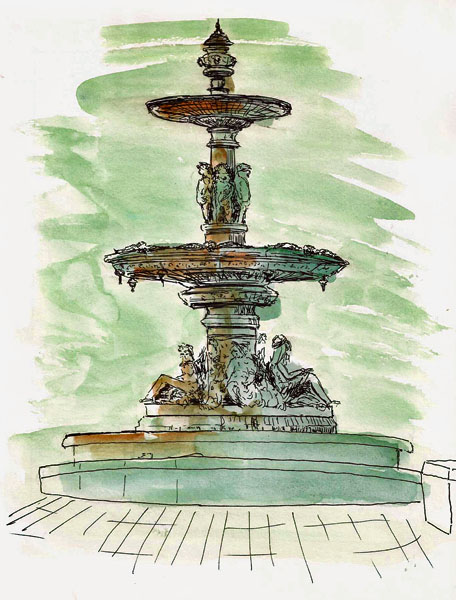 4 Responses to “Sketching The Tourny Fountain”