I suspect I’m not the only one who feels that the holiday season is more a disruption than something to celebrate.  I’m an old guy, set in my ways and those ways are for me to go sketching.  But with all the hoopla my routine has gone bonkers and my sketching has become scattered.  I thought I would just post a smattering of the many small, generally incomplete sketches I’ve done over the past week or so leading into New Years. 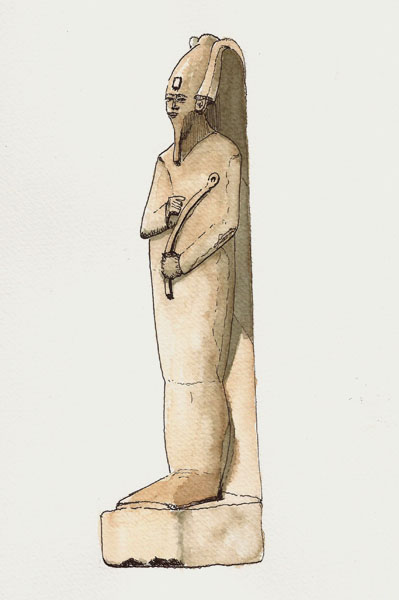 Here’s a sketch I did one day at our museum.  Another Egyptian guy, standing stiff against a wall, or so it seems.  I don’t really know who he is but he was fun to draw and that’s good enough for me.

He was done in a Stillman & Birn Gamma book with my Namiki Falcon and DeAtramentis Document ink.  Color was mostly burnt sienna with a bit of ultramarine to produce the grays.  I played with the notion of making him look like stone, which he was.  I’m not sure how successful I was in this. 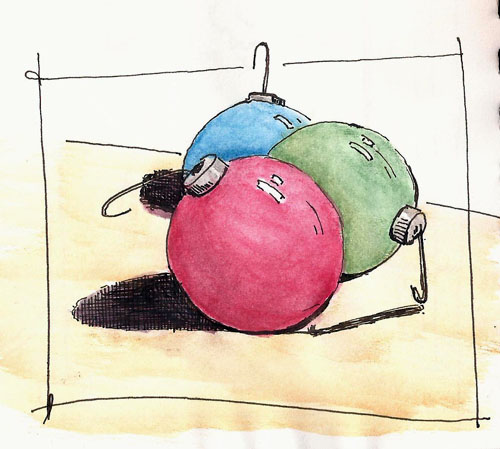 Otherwise sketching has been a bunch of doodles here and there, mostly on photocopy paper.  On New Years Eve, however, I was watching TV with Chantal and I drew these three ornaments that were laying on a table.  Color was done with watercolor pencils but the sketch was done on cheap paper and so I couldn’t use a lot of water or move the color very much. 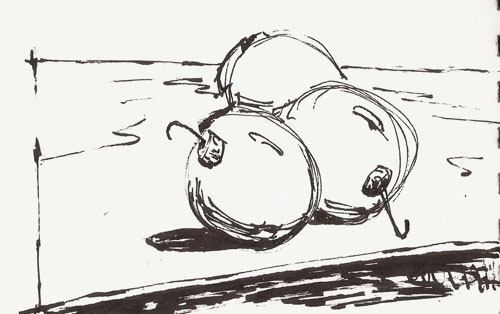 I was still bored by the TV so I picked up my Sailor fude pen and decided to give it a whirl.  I’ve never adapted to the fude pens because I typically want thin lines and there are better tools for that.  But I’m determined to improve my ability to draw heavy-line, quick sketches for some reason.  I started out by drawing the same three ornaments.

As I scanned this for the post I couldn’t help but think of a conversation I’ve been having with Tina Koyama about what or whether the degree of expressiveness in a sketch says about what the artist was feeling, either about the sketch or the subject.  The two sketches above were done within minutes of one another and yet one was done with an “expressive” stroke while the other was done in a more controlled fashion.  I’m pretty sure I was wishing the holidays would be over during both sketches (grin).

I turned my fude pen to my imagination and one thing I drew was a bunch of imaginary carriage lanterns.  I’d talked to Yvan about meeting to draw some at the museum where there’s a carriage exhibition going on so they were probably on my mind.  Anyways, prior to drawing these I looked at a couple sketches I’d done of some a few months ago but these were all done in a very few minutes. While I think they reflect bits and pieces of ‘the real thing’, they’re purely imaginary. 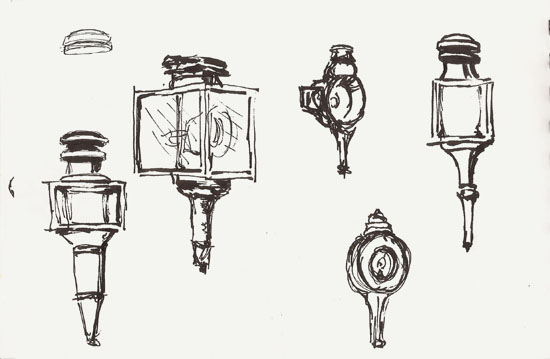 Now that the holidays are over, I should return to a more normal schedule.  I’m still a couple sketches/days behind on the blog but I’ll get caught up “real soon.”

2 Responses to “Sketching Over The Holidays”