If you’re old like me you remember black and white movies.  As a kid my favorites were the cowboy movies, particularly those about people “moving west” to settle the “wild west.”  These movies were packed with caricatures, though I was too young to notice at the time.  Classic “tonto” depictions of Native Americans, white guys in white hats who were bigger than life and who, I’m sure, could leap tall buildings with a single bound but who never had to because they managed to shoot 30 times with their 6-shooters.

Very often there was a French trapper, always named Jacques, who was either someone’s sidekick, or occasionally stood in for the black-hatted bad guy.  As a kid growing up in Arizona, it’s what I knew of the French.

Well, there really were French guys named Jacques and I suspect they were tougher than John Wayne ever thought of being.  They were the real deal, though they weren’t all named Jacques.  Some of them were named Louis and one named Louis Joliet ranks right up there with Lewis and Clark, when it comes to being a trailblazer.

Born near Quebec City, Joliet became a trapper after bailing out of a path to become a priest.  An accomplished harpsichordist and organist, Louis not only spoke French but several of the native languages as well, and he became a trapper and explorer extraordinaire.  He and his buddy Jacques Marquette (see, there were real French trapper/explorers named Jacques), discovered the headwaters of the Mississippi River and were the first to map its entire length.  Joliet, Illinois, among other places is named after him.

Ok…I’m back.  This is a blog post about sketching after all.  I sometimes get lost in Quebec’s history.  In short, he was a big deal and one of Quebec’s best sculptors, Suzor-Côte created a wonderful bronze statue of the man.  It resides against the walls of the Quebec Parliament with other statues of famous Quebecers, each with their own place in history.

On this day, I only sketched one of them, otherwise you’d have to endure more history lessons.  Instead I’ll just tell you that I sketched in a Stillman & Birn Beta (6×9) using my Namiki Falcon and DeAtramentis Document Black ink.  If you follow this blog you know that I’m really partial to the Falcon/Document Black combo.  It’s fantastic for pen and wash, though in this case I got lazy and didn’t put any color on the sketch.  The sketch is probably the better for it. 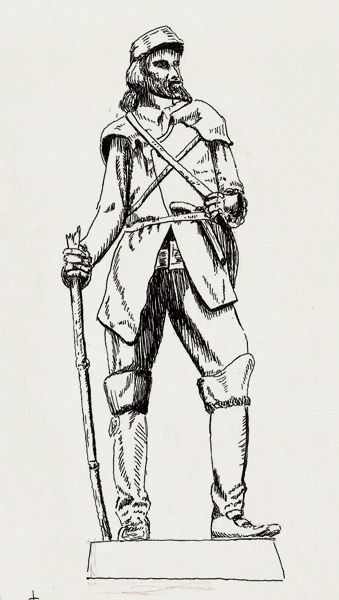