I had a great time on Thursday.  Normally we meet at the museum to sketch but Claudette knows someone at one of the major plant nurseries and she arranged for us to sketch in their large greenhouses.

We arrived at 10AM and spent the next two hours sketching, chatting, and generally having a great time.   As I entered the room I noticed a large concrete tortoise sitting on a shelf.  He was gorgeous and I lamented to Yvan that I wished he were on a lower shelf as if I sat on my stool, he would have towered overhead.  But luck was with me as they actually had several of them, one of which was sitting on a large flat table at my eye height as I sat on my stool.  So I drew him.  Isn’t he cute?  I should have drawn some ground for him to walk on.  I think he would have appreciated that. 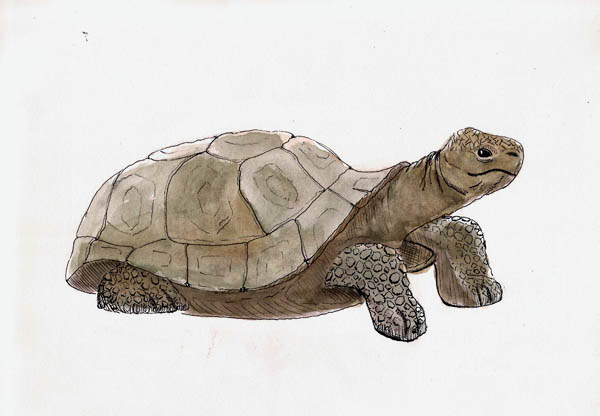 When I finished, my back needed a rest so I wandered around, checking what everyone else was drawing.  I’m nothing if not nosy.  Francine is just back from a couple months visiting the sun in Mexico so it was fun to catch up with her.   She’d sketched a stone fish that I liked very much so I decided to draw it too.  I decided to do it in my red Field Notes book, a small book that’s providing me way too much fun.  I suppose ‘serious’ artists don’t draw stuff like this but I had a lot of fun doing it. 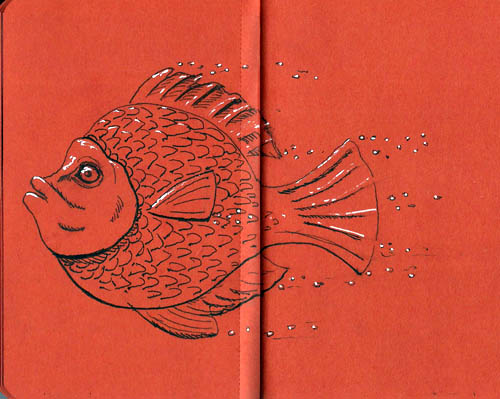 When I finished I realized that it was almost 11:30 so I checked with everyone again to find out how much longer they would be sketching.  We typically break for lunch no later than 12:00 and it sounded like today would be no exception.  So, I started wandering, looking for something else to draw.

I was in a nursery so flowers and plants were everywhere but I just wasn’t motivated to draw any of them.  Not sure why but I was more in the mood to keep drawing garden decorations.  I spent time looking at garden gnomes, nearly decided to draw a different turtle but then I saw these fat green frogs.  I couldn’t resist.  It was akin to drawing a ball with eyes.  Hope you like him. 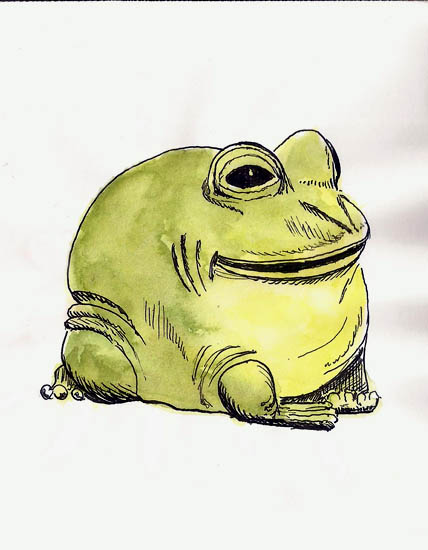 4 Responses to “Sketching At A Plant Nursery”