What could be better for a sketcher than a place where there are hundreds of animals that don’t move.  Daniel Chagnon, an organizer for the Le Collectif des ateliers libres en arts visuels de Québec (CALAVQ) organized an event at la Fédération québécoise
​des chasseurs et pêcheurs.  This is a bit outside the domain of CALAVQ, which is primarily a portraiture group, but Daniel has been organizing more and more of these events and it’s very exciting to see.

I didn’t know that the Quebec hunters and fishermen had a museum/training center but this place is incredible for those of us scrambling to find winter sketching places.  It’s a bit of a drive but access is free, though they appreciate donations.  There is a lunch room with microwaves, vending machines, etc. AND several hundred taxidermy specimens just waiting to be drawn.  The hard part was deciding what to draw and being satisfied even though you didn’t get to draw everything.

There were a dozen of us sketching in the building and a lot of sketches were produced.  I found myself drawing too quickly and I was a bit disappointed in that.  I sometimes get ahead of my skis and it shows up in the results.  My attempt at drawing a wolf is a case in point.  I blocked it in quickly (ie too quickly and I got one foot in the wrong place.  I drew the eye incorrectly, tried to correct it, only making it worse.  Still, it looked like a wolf, sort of.  You might notice that it’s not displayed here 🙂 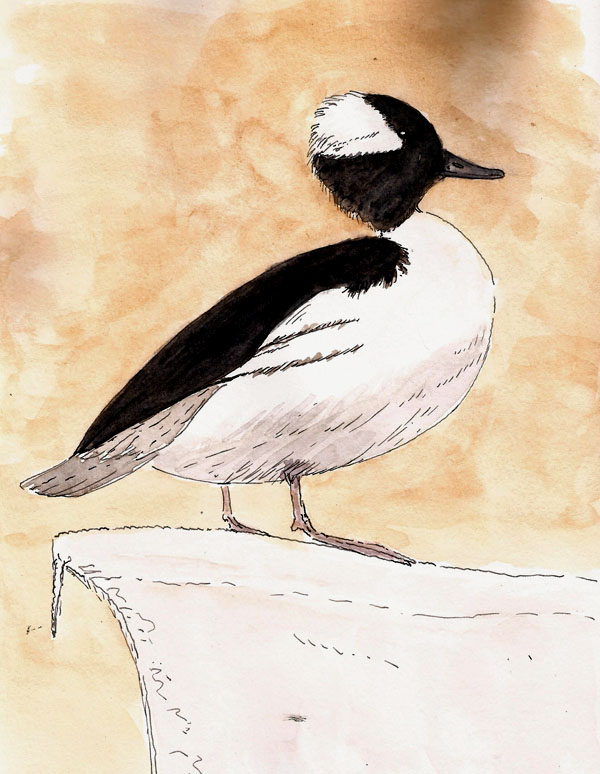 I moved onto the wildfowl area and drew this elegant bufflehead.  Here I bumped into my watercolor ineptitude and had trouble obtaining a really dark black, but I was generally happy with the result.  Robert Bateman I am not.

After lunch I decided that since I’d drawn fur and feathers that it was time to draw a fish.  I like the small vignette surrounding this one.   Striped bass used to be common to the stretch of the St. Lawrence River around Quebec but they had nearly disappeared until the fishing and hunting organization started a program to build up their populations.  They are being grown and planted along the river and fishing regulations prohibit the taking of this fish.  From what I could read, the program is making good progress towards their reintroduction.

I slowed down just a bit, partly because of my early morning lesson and partly because I was just getting tired.  I think the result was more in tune with my norm…only a few mistakes (grin).  Thanks to CALAVQ and particularly Daniel for organizing this event and introducing us to the museum.  We’re heading back here on Tuesday. 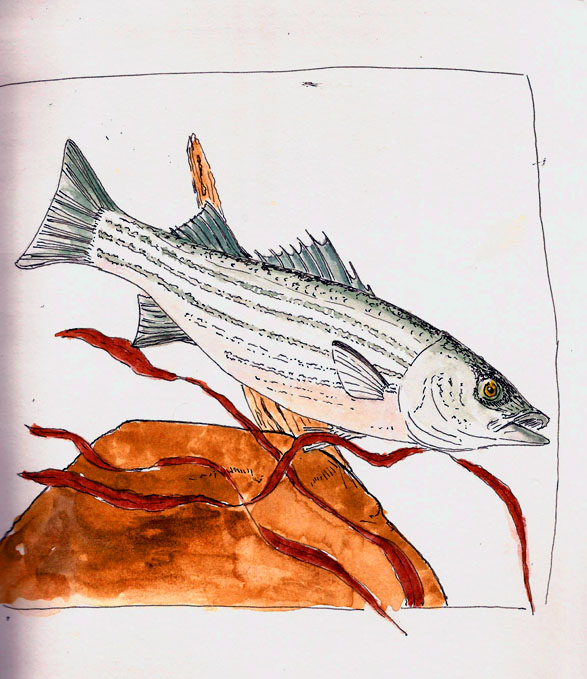