One of the exercises for this week’s Liz Steel Foundations class was to draw a door.  This was supposed to be our “outdoor” exercise.

There is nothing I’d rather do than draw outdoors but I’m afraid that weather dictates that I won’t be able to do that until at least April and that’s being optimistic.  Not wanting to wait quite that long to do the assignment, I found an alternative.  As I was leaving the museum I noticed that if I sat down just inside the rear entrance, I could see the door across the street.  Where there’s a will, there’s a way.

The door leads into the Hotel Saint Pierre but the door has a far richer history as it served as the main entrance of the “Quebec Assurance Building,” and the interesting thing is that this is carved, in English, in the upper reaches of the building – a remnant of times past as it’s fairly rare to find English written anywhere in Quebec City.

The exercise goal was to ‘set up by measurement’ and thus the principle goal was “..to be as accurate as possible.”  I can’t say that I was (sorry Liz) but I did it in my typical cartoony style and in spite of what it looks like, I did measure, with my thumb stuck up in the air and everything.  I really enjoyed sketching something that wasn’t a statue and I think I need to look around for some more doors to look out of. 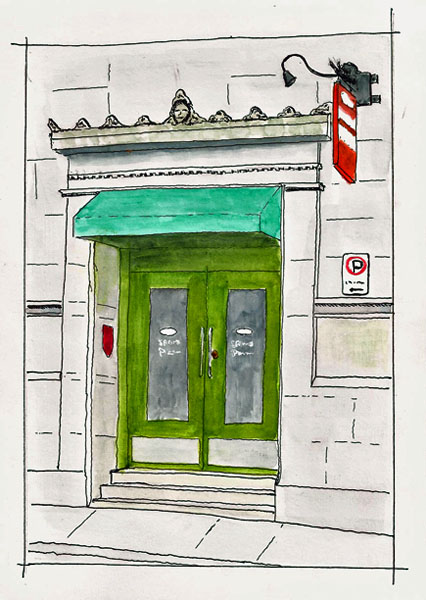