I’ve made the comment several times, here and elsewhere, that sketchers are never bored.  When I’m sitting in a doctor’s office there are people to sketch.  When I’m waiting for the car to be serviced there’s all sorts of stuff to sketch.  I drew a billboard the other night while waiting to pick up my daughter.  And when there’s nothing on TV I can always sketch scenes in the commercials.  I’ve been known to draw pages full of lines, ellipses, and circles, too.

But I’ve been bored…REALLY bored.  The flu has a way of eliminating all notion of sketching, thinking, looking, seeing, and about the best I could do over the past few days has been to sit and become over-dosed on Olympics coverage.

Today the residual ‘tuckered out’ feeling was all that remained of my bout with a gaggle of viruses and I wasn’t going to let that stop me.  I headed to the museum to meet up with Yvan for a sketching session.  I’m afraid I’m still a bit less than optimal but I managed this sketch.  There is an 1898 Renault Mini-Car on display and while I have to get around to the front of it for a sketch, I just love this view from the rear as it shows off its red running gear. 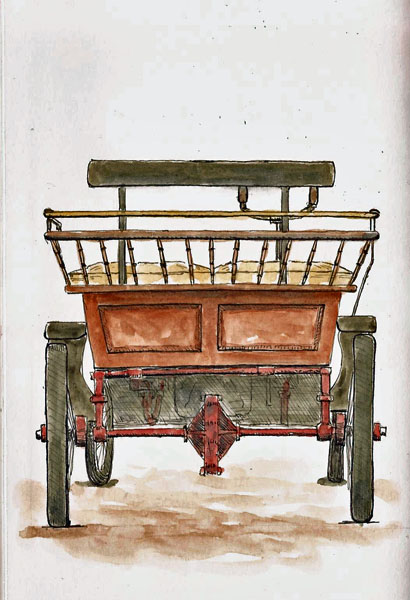 3 Responses to “Sketchers Are Never Bored…Mostly”