I reported on some single-line sketches I’d done in a previous post, an idea presented by Marc Taro Holmes in his free PDF handout, Making Expressive Pen and Ink Drawings on Location.  Marc has a new Craftsy course titled Travel Sketching in Mixed Media, an amazing follow up to his People in Motion course and he begins the course with the single-line sketching exercise.

Getting to see him actually do single-line sketches made me realize that I was doing them “wrong.”  They are, afterall, an exercise meant to loosen up your hand and to get you to emphasize the big shapes, while not becoming mired in details.  But Marc had said, “Keep the pen moving” and so I did.  The result was that each time I had to stop to figure out how to get from one thing to the next (a distracting problem of single-line sketching) I ended up with a bunch of squiggles as I “kept the pen moving.”  The results were very scribbly sketches.

Ok…just you…yeah, you, the one looking into the monitor.  Lean in close because I don’t want to give away Marc’s secret to everyone, but just between you and me [dropping my voice to a whisper] he doesn’t do that.  He stops his pen on occasion as he looks how best to get from point A to B between objects.

And so, I was out doing more single-line drawings.  I’ve also decided that I’ve got to learn, once and for all, how to draw while holding my sketchbook and standing up.  I really struggle with that.  My line work becomes completely out of control.

I took some inexpensive watercolor paper (9×12) and cut it in half.  These 6×9 sheets were used as I did a bunch of single-line drawings.  Each of them only took a minute or two for the linework.  Then I added some brush pen darks (another place I struggle) and for a few of them I added color.

This is a great exercise that sets the stage for the less radical approaches to expressive drawing that Marc explains in his class.  Tell you about them?  Heck no…go take the class (grin).  You’ll never regret it and Craftsy classes are inexpensive.  Here’s one of my single-line sketches. 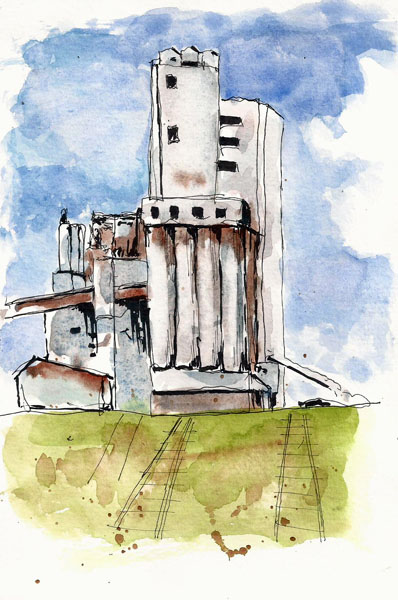