The morning of this month’s Croquis de Quebec sketchcrawl bordered on the depressing.  It was the proverbial dark and stormy night only it wasn’t night, but it was certainly stormy.  I headed to our sketchcrawl in full rain gear, thinking that only Yvan and I, the organizers, would show up as people are reluctant to sketch in the rain.  Go figure. 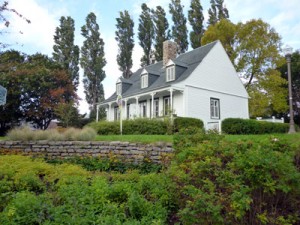 The sketchcrawl was to be in a park near my house so the walk was short.  Yvan had arranged for us to be able to take shelter in Maison Dorion-Coulombe to eat lunch.  This house is the office of the Societé de la riviere St. Charles, the group that manages the very long (I think it’s 32 km long) Parc lineare.  I headed there, and found Yvan, huddled at one end of the long porch that fronts this beautiful house.  We lamented our bad luck (the next day was supposed to be warm and sunny) and I sat down to draw some pumpkins that were sitting on the porch. 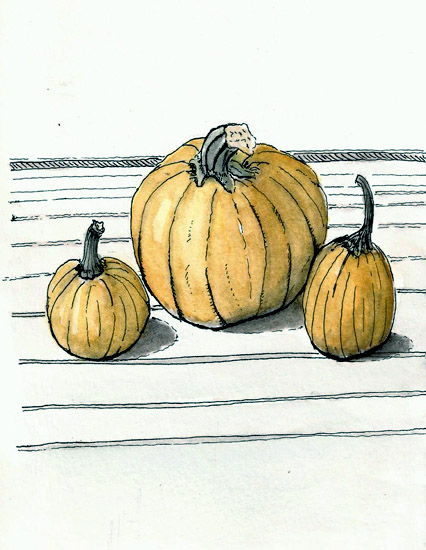 Yvan got up and said he was going inside to chat with them about our “event” and returned very excited.  He was almost at a loss for words as he’d discovered that inside was a cornucopia of things to draw.  Inside there were plants and a host of stuffed birds and mammals.  And in a large aquarium was a large turtle named Donnatello.  He and I talked for quite a while.

Things just got better and better.  Cassandra, the woman who runs the place had no problem with us moving the taxidermy and situating it on one of the tables so we could draw it.  The cushy chairs were quite a step up from my tripod stool, too.   I found that they sell tea, coffee and soft drinks and I ordered a coffee.  It was some of the best coffee I’ve ever had.  Now this was sketching at its finest.

Still, a sketchcrawl of two is a bit of a hollow adventure so it was pretty special when our friends Pierre and Celine came in, followed shortly afterward by Guylaine.  The sketchcrawl, without the crawling, was on.  We spent the next few hours sketching, talking and even spent some time sitting around a table eating lunch.  The time passed too quickly.  Here’s a sketch I did of a Northern Saw-whet owl. 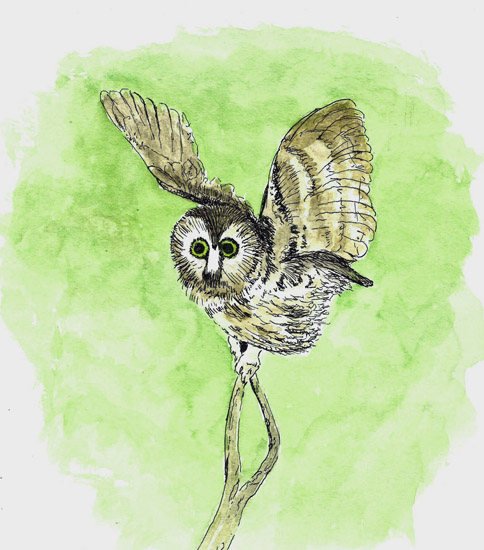