It’s becoming difficult to sketch outdoors in Quebec City.  It’s comfortable to walk as long as one wears proper attire but to sit and sketch for any period of time is beyond my capacity to endure.

So now the scramble to find indoor subject matter begins.  Claudette and I met at the Université Laval library and their small natural history exhibit.  It’s a small display and we’re running out of sketching possibilities but I decided to draw the head of a polar bear who, I suspect, had ducked into the library just to get out of the cold.  Sketchers aren’t the only ones that find Quebec winters harsh.

I had fun doing this in my Stillman & Birn Delta sketchbook, though it’s only a 6×8 and I would have like a larger format for this sketch.  Have I mentioned how much I like Faber-Castell Albrecht-Durer watercolor pencils?  They’re the only ones I’ve found where a waterbrush can completely eliminate the pencil lines.  Anyways, I hope you like Mr Polar Bear, though he might be a she. 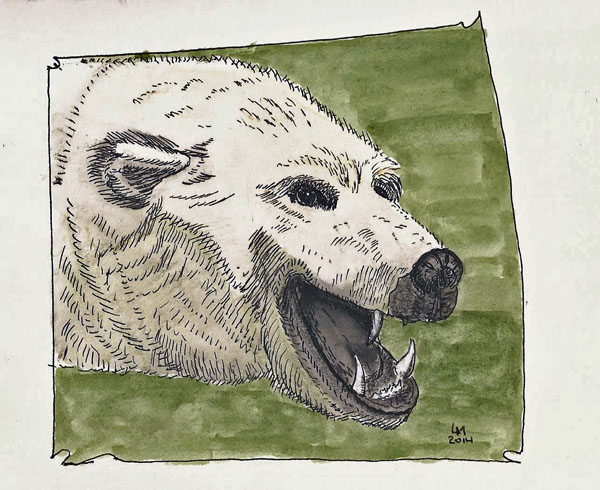