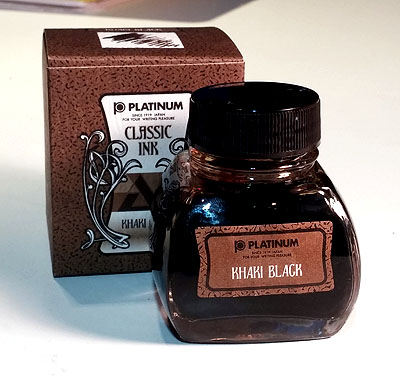 Platinum has just released six new inks and you’ll probably be hearing about them over the next few months.  They will catch the eye of sketchers because they are iron gall inks that are fountain pen-friendly.  Iron gall inks have the virtue of being “waterproof” and those of us who like to slather our drawings with watercolor always pay attention when that word is thrown about.

I’ve found it odd that one could produce colored (besides brown or gray) iron gall inks because creation of iron gall inks is an old way of making ink, combines tannins with iron to create them.  Nevertheless, lots of inks are coming on the market and labeled “iron gall”, whether they’re red, blue, or purple.  Better living through chemistry, I guess.

In the case of these Platinum inks, however, the naming convention caught my attention as every one of them is named Platinum (some color)-Black.  I didn’t know what that meant but was excited enough to buy a bottle from Wonder Pens, who got it to me quickly.  This is a very pricey ink (roughly $30/bottle) so Wonder Pens’ low shipping costs was appreciated.

I’m not here to review this ink.  Lots of people who collect or write with fountain pens will do that so a search should yield reviews.  I find the ink great to sketch with, though, and have it in a couple pens right now.  But I want to talk about the waterproof attribute, or lack there of.  As it turns out, the “black” portion of these inks seems quite waterproof but the tint that generates their unique color does not appear to be…at all.

Notice the small sketches in the graphic below.  The one on the right reflects the color of the ink after it has dried for a while (it darkens as it dries).  On the left is what happens if you wipe a waterbrush over it.  As you can see, the brown tint disperses, leaving behind a dark gray outline.  This particular sketch was done on inexpensive paper.  On good watercolor paper the results are even worse.  So be warned, waterproof in the pen world doesn’t mean waterproof in the pen and wash world. 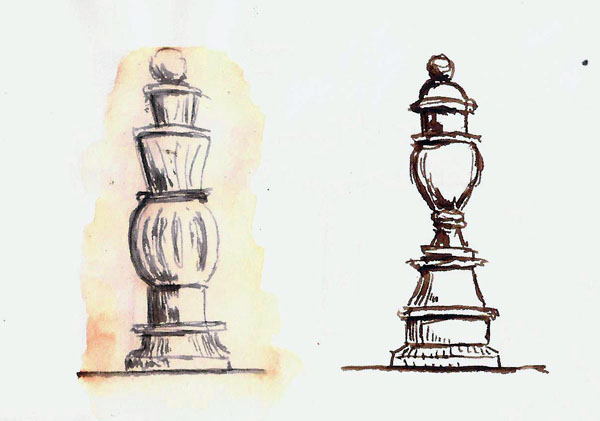 10 Responses to “Platinum Khaki Black As A Sketching Medium”