So, in Beverly Hillibilly fashion, “[insert banjo music here] we loaded up the truck and we moved to Berthier…Berthier-Sur-Mer that is.”   The town of Berthier sits on the southern coast of the beginnings of what is called the Gulf of St. Lawrence.  To the west is Quebec City and the beginnings of the St. Lawrence Seaway and to the east is the Atlantic Ocean.

Our specific destination, though was the marina and park area of Berthier-Sur-Mer.  This is a lovely place, with lots of benches for sitting, a small restaurant and lots of sailboat traffic because of the marina.  On nice summer days one can sit on the quay, enjoy the ambiance of waves washing onto the rocks below and get the ‘out of the city’ atmosphere that we picnikers appreciate.

And it was a sunny, relatively (for Quebec) warm day.  The problem, however, was the wind, whipping in from the gulf, causing Berthier-Sur-Mer to be very cold.  We walked around a bit and decided that the only logical course of action was to get some coffee so we headed for the restaurant.  We got the coffee and found an outdoor table that put our backs to the downwind side of the building. 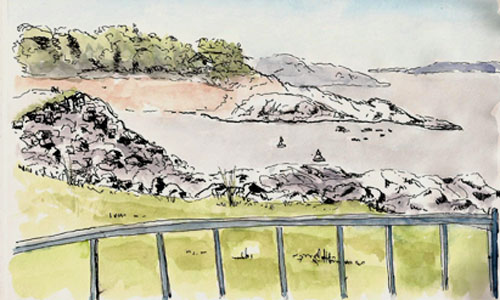 Out of the wind, it was quite nice and so I decided to sketch what was before me, which was the entrance to the marina and the breakwall that jutted out from the restaurant.  I didn’t spend too much time on it but it was fun to do. 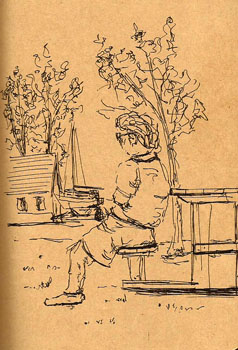 But we’d come for a picnic and the three of us were getting hungry.  What to do, what to do.  I went to the car to get the picnic basket while the family foraged for a place where we could sit out of the wind.  We were both successful in our tasks.

I include this tiny quick-sketch as representative of several that I did that day, between bites of cheese, baguette and fruit.  In spite of the wind we had a great day and towards the end of it I decided to draw this pile of leaves from a hawthorne tree/bush. 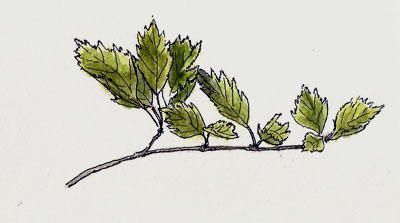