As the internet brings me sketches of cherry blossoms, crocuses popping out of the ground, and various pronouncements of spring, we’re bracing for a foot of snow tonight.  Spring will come to Quebec but I’m beginning to wonder if I’m going to live long enough to see it.

We were back at the museum again, a place I’m really tiring of this year.  In the past the exhibits have been very interesting and full of variety but the main exhibit this winter has been Egyptian Magic and, well, there are only so many times one can sketch another stone statue of a mummy or the favorite Egyptian god, Bes.  To make matters worse the exhibit is very dark.  You can’t even see many of the display items it’s so dark and after a while it becomes downright depressing. 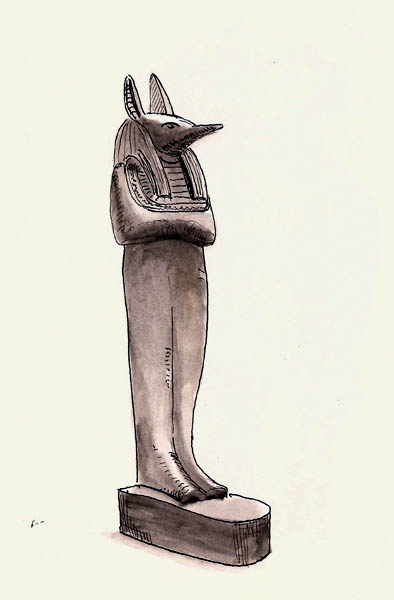 Yvan and I sketched this guy because he was outside the exhibit and there was decent light.  It’s not a real artifact, however, as you can buy one at the museum store 🙂

After that I decided to go to the Australian aboriginal exhibit.  It’s mostly tapestries and such but I found these guys fun.  Meet Mimih, who is something of a jokester god.  They’re tall (8-feet or so), thin and they hide in the cracks between the rocks in Arnhem land.  It took forever to put all those dots on him with a Uniball white pen but at least there was light in the room.

The snow is starting.  Maybe I should trade in my sketchbook for a snowboard (grin).