It’s already May and so far I’ve only been able to do three outdoor sketches.  We’re getting some borderline warm-enough days but we’re also getting a lot of rain and wind which has made outdoor sketching difficult at best.

But I was out walking through a light mist, trying to get some exercise when it stopped raining.  I bought my raincoat extra large so that I could wear it over my art bag, so I had that with me.  The concept of sketcher desperation may be foreign to people who live in places with reasonable weather but for me, an ex-Arizona guy living in a place that stretches the truth by saying that we have five months of decent weather, it’s a very real concept.

Anyways, with water dripping from my raincoat, I decided to draw.  I was near a small chapel in Victoria Park and so it became my subject and I quickly drew it on some toned paper I had.   As I drew I realized that this chapel isn’t being used as such anymore as windows and doors all have plywood inserts in them.  I drew it that way and I didn’t add any color until I got home and even then kept it as somber as the day was when I sketched it.  Not my best but it was really great to be breathing outdoor air while moving a pen around. 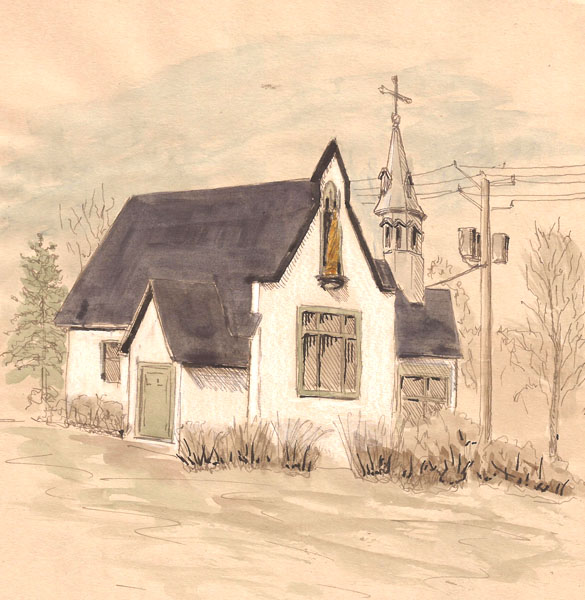 2 Responses to “Mother Nature Continues To Tease This Sketcher”