I’m settling into a winter sketching regime which means I’m becoming a regular at Quebec’s Musee de la Civilisation  again.   I made over 50 museum visits last year and it’s likely I’ll do the same this year.  This day, I was with my new buddy, Fernande and we had a good time sketching in the Paris exhibition.  We followed up with a celebratory tea in Cafe 47, the museum cafeteria.

I nearly went cross-eyed trying to do a ‘proper’ drawing of this Delizy Brassart bicycle, which dates to 1889.  I was particularly interested in getting the frame organization ‘right’ as it’s very unique, with the crank being bolted on below the actual bicycle frame instead of being an integral part of it.  The solid rubber tires and carbide light are also very interesting.  Bicycling was a big deal at the turn of the century, with many innovations, the first Tour de France, and women wore bloomers so they could ride, showing off their ankles.  Ooo la la! 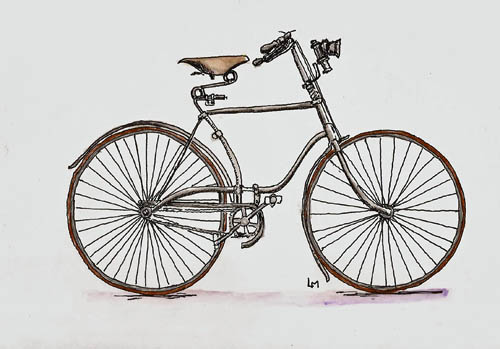 I thought I should draw something a bit easier after that so I chose this vase with stopper.  Pretty little thing and, I fear, I didn’t do it justice.  I used a Uniball UM-151 brown-black pen to do the brown markings on the vase, which worked better than I thought it would. 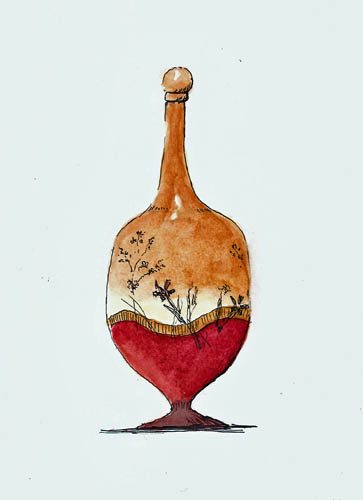 One thing about museum visits is that they challenge me to draw things I might not otherwise draw.  It really helps and there’s nothing better than a museum atmosphere to stimulate the creative neurons.