WARNING:  This is a long post, punctuated with sketches and photos but mostly Larry’s drone about one of the best sketching days of his life.  Strong coffee is advised.

Friday morning I was up early.  I was supposed to meet Marc, Liz and Anne-Laure at 10AM.  I was at our meeting place by 8AM.  I thought it would give me a chance to do some sketching before they got there.  It was raining by the time I got there so I ducked into a coffee shop.  I sketched a few people but mostly I just stayed dry and drank coffee.

When it finally stopped raining I found a place to sit and started sketching the library across the street from the metro station where I was to meet them.  It was pretty exciting to meet Liz and Anne-Laure.  Both are really fun, talented people.  If anything was going to intimidate this sketcher it would be trying to keep up with these three, but I had a head start because I’d already started my sketch.

All the value of the head start earned me was the ability to watch these folks in action.  But to do so I had to be careful not to blink or I’d miss a lot.  In addition to being good, they are FAST!!  I had time to flip through one of Liz’s sketchbooks while she replicated the sketch I’d done, only hers was better.  Anne-Laure worked direct with paint and did an amazing sketch of the same building, while Marc created a Frankenbuilding by adding the steeple from another building to the building we’d all drawn.   I’m hoping you won’t notice that you won’t notice that I didn’t take photos of their drawings so I wouldn’t have to post them for comparison with mine.  It’s better that way (grin) 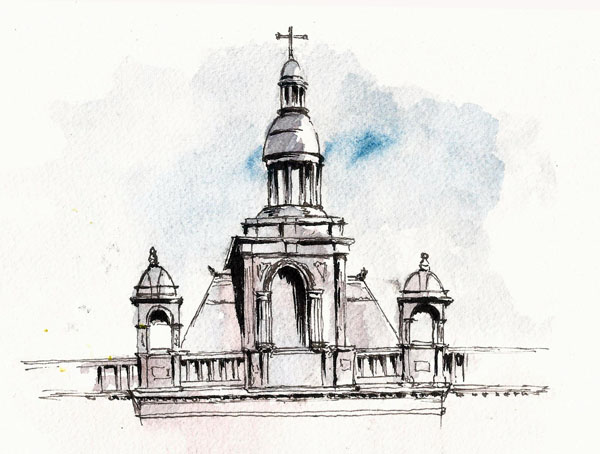 And then we were off on an adventure, an adventure that the slowest sketcher on the planet was ill-equipped for but I had a blast trying to scribble fast enough to keep up.  It reminded me of the “extreme sketching” that Marc got me doing last winter where we’d go out in very cold weather and do a sketch in five minutes before moving on for the next one.  The only thing missing was the cold.

We turned the corner on Mont Royal St. and there was a row of stores and Liz said, “Let’s draw those.”  She plunked down on the sidewalk and went to work.  Understand, I could draw those stores – yes I could.  But it would take me an hour or more, that I knew I wouldn’t have this time.  Instead I pulled out a tiny Stillman & Birn sketchbook and started scribbling away as fast as I could.  Ten minutes later Liz had a beautiful, full-color drawing.  I had this: 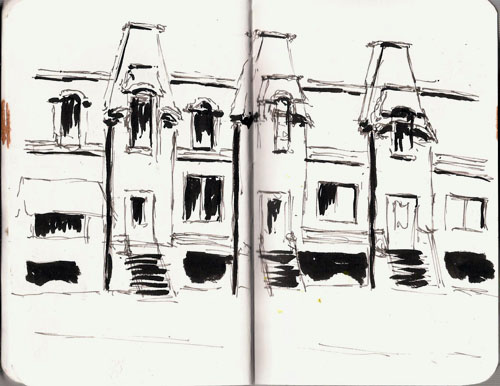 Anne-Laure was smart and only drew one of the stores.  I’m not sure what Marc did.  Maybe he yawned and thus ran out of time.  Don’t know.  I do know that I was pumped and we resumed our walk. 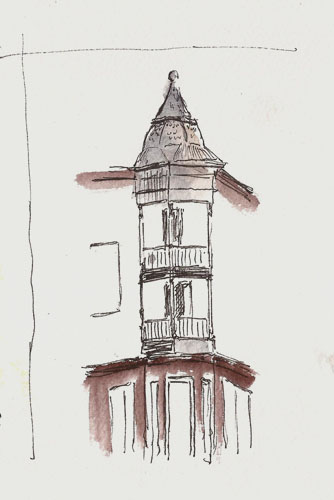 Marc took us down a street to show us a corner balcony and I heard it for the first time, “Let’s just do a five minute sketch.”  And that’s what we did, though it might have run a few minutes longer than that.  I lose all control over proportions when working this fast and so it went while trying to capture this two-story balcony.   Of course, everyone faired much better than I did.  Humbled be me.  Marc had limited himself to a loose pencil gesture… of the entire building, the one next to it, the mountain and trees behind it, and some of the cars on the street.  How does he do that so quickly?

Marc had a plan and we were on a tour of some of his favorite sketching locations.  But he also needed to take us to Patisserie Notre-Dame Du Rosaire, the best darn Natas dispensary in Montreal.  Why?  Because Liz wanted to draw Natas in preparation for the 2018 USK Symposium in Porto, Portugal, that’s why.  There might have been something in there about actually eating Natas too.  I’m not sure.

Anyways, we arrived, bought half a dozen Natas and sat down to sketch.  Anne-Laure and Liz went after their Natas with paint.  Marc and I had a more gustatorial approach.  Natas are yummy.

Following the snack, we walked down to a cathedral (there’s one of these on every street corner in Quebec), initially to use the facilities but then the words rang out, “Let’s just do a five minute sketch.”  So, we did.  I figured that in five minutes I could probably draw one of the light bulbs so that’s where I started.  By the time I’d finished the entire light fixture the others were really getting into it.  Marc appeared to be drawing the entire cathedral, Liz was finishing up her first sketch and was heading to a different seat to start another.  So I started doodling, drawing part of the large alter area, then the seat in front of me with a semi-approximation of Liz who used to be sitting there.  When I finished Marc had this amazing drawing that seemed to go on forever.  Anne Laure had done the entire front portion of the church and Liz had done at least two sketches, if not more.  Me, I had my doodles.

I commented that I thought they said we were doing a five-minute sketch and that’s when Liz explained it to me.  “Let’s just do a five minute sketch,”  is a way of getting everyone started.  How much time is actually spent is negotiable.  It’s amazing how much art jargon you can pick up when you hang out with experienced artists. 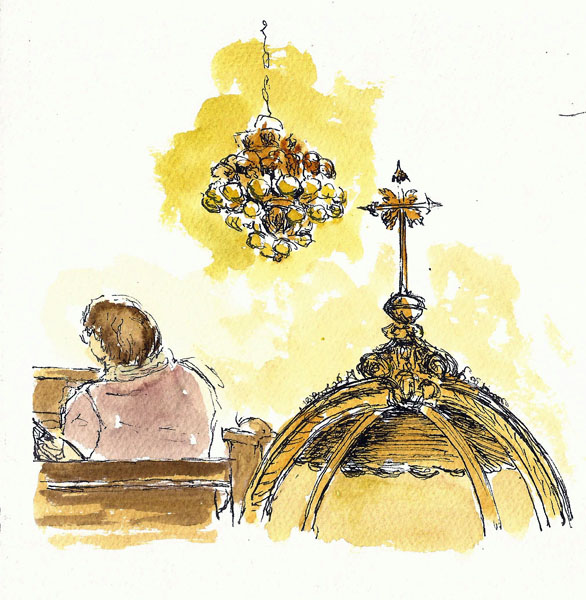 We continued walking but concluded that it was time for lunch so Marc took us to this great place.  Here’s a photo of the pros taking a break, sort of. 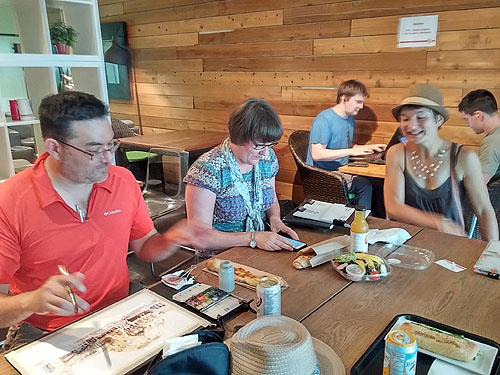 With lunch over, we headed to Carré St. Louis which is a long rectangular park with a big fountain in it and it’s surrounded with more gingerbread architecture, some of it painted by Disney.  I could spent a week drawing there and want to come back for more.  Liz said, “No wonder Marc’s always drawing the tops of the building.” 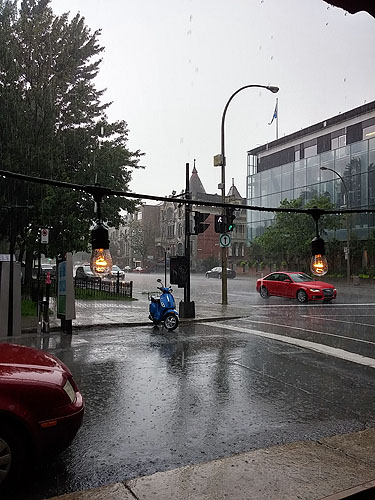 But then the thunder started and even dedicated sketchers can’t stand in a downpour to draw so we looked around for a place to be dry and still sketch.  We chose Hippi Poutine, a poutine-serving place with a covered patio.  We’d just eaten but we ordered coffee and Marc bought a small poutine so the “foreigners” could try it. Poutine is french fries smothered in gravy with cheese curds on top.  It’s recommended by cardiac surgeons everywhere. 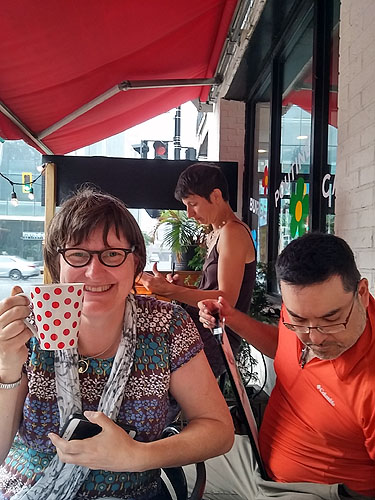 When the rain came, it really came.  The streets cleared of people but we had a view of a multi-faceted building and we all went to work.

Liz and I were getting spray coming in under the awning and Marc had water dripping down his back as it poured down the walls.  Undaunted, they worked away.  Then it got windy and Liz and I got a face full of water.  I believe her sketch got splattered as well but that doesn’t seem to bother her.  Mine did too but I was starting to get really wet and so closed my book, set it on the table to my right and concentrated on drinking my latte.  When the wind let up I picked up my book to continue only to find that it had become completely soaked by rain coming down the wall.  The only saving grace was that the book was almost filled so the last few pages, which are now stuck together, were the only real loss.  I won’t be showing you to scribblings I had done of this place.

The rain finally stopped, though, and we continued our trek through the Montreal neighborhoods and ended up on Sherbrooke street in front of the Ecole des Beaux Arts. It was only fitting that we draw it and, lucky us, there was a covered place to sit on the opposite side of the street in case it rained.  It’s a huge building so I just concentrated on the center portion of it. 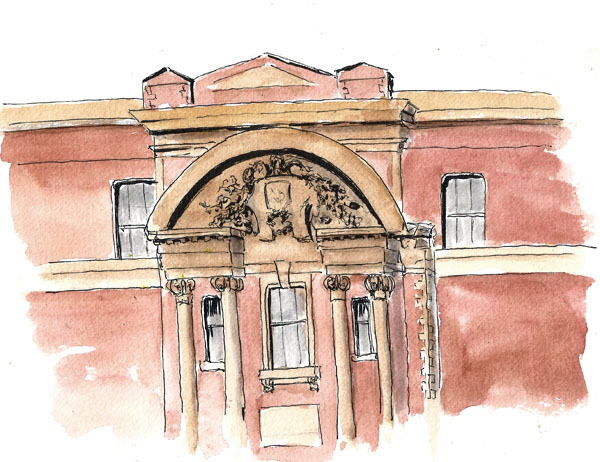 From there we stopped at Notabene, my new favorite store.  It sells old typewriters, every notebook in existence and pencils, pens and inks.  We all ended up buying stuff before we started searching for a place to have dinner and maybe sketch from outdoor seating.  That evening we found ourselves in an art store because Liz needed gel pens and where Anne-Laure bought a bunch of Fabriano Artistico sheets.  Somehow I managed to leave without buying anything.  Might be a first for me.

This day was one of the best sketching days I’ve had in my life.  It was an honor to be able to sketch with Marc, Liz and Anne-Laure and I thank them for their fun and generous nature.