My daughter was coming home for Canadian Thanksgiving (it’s in October) and rather than have her take a train, I wisely reasoned that it wouldn’t cost any more for me to drive to Ottawa to pick her up and bring her back to Quebec City.  Yes, it would mean ten hours of driving but heck, I could spend a couple hours sketching in the nature museum (I have a membership).  And yeah, maybe that is a bit crazy but I am, as Steve Martin used to say, a “wild and crazy guy” when it comes to sketching.

So, at 3:30AM I drove out of town so that I could arrive at the museum when it opened at 9AM.  This insanity was rewarded with a wonderful early morning sketching session where I got to hang out with a family of Megacerops.  Well, actually they were life-size models of them.  They roamed Manitoba and some of the plains states, but they went extinct a while ago, maybe even before I was born.  They sure were big, though, and he wouldn’t fit on my paper and I decided that this end was better than the other end. 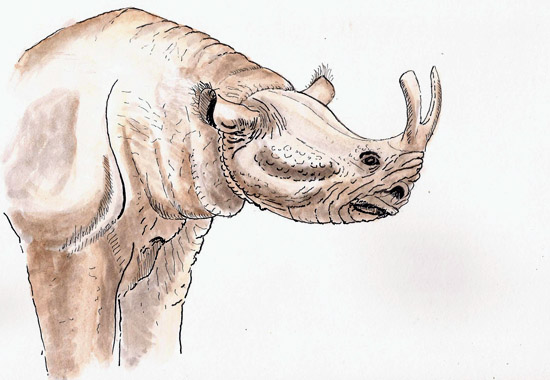 When I finished I had to leave to meet my daughter for lunch.  We had a great lunch and then continued to chat until her afternoon class.  At that point I repeated my 20-minute walk back to the museum, intent on doing more sketching.

It was not to be.  When I arrived I learned about something called a PA day.  I don’t really know what PA means but it happens in schools.  What it meant to the museum was that every young kid in the Ottawa area was at the nature museum, or so it seemed.  The nature museum is designed for kids to get excited, have fun and with so many of them there the decibel level in the museum, accompanied by the frenetic movement of little bodies around the rooms suppressed any notion I had of drawing.  I made the best of it by actually visiting the museum like a normal person, reading the plaques and learning a few things about the exhibits.

So, please do me a favor.  Look at my Megacerops a few extra seconds; I drove ten hours to draw it (grin).

One Response to “Megacerops In Ottawa”