This is actually a follow up post from my last about sketching in small notebooks.  It’s the case that I kinda-sorta glossed over how to construct the binder I talked about.  Maybe I should do it more often as I got emails from a few nice people asking me questions about it.

So here is an explanation of how to make that small binder.  Clicking on the photos will enlarge them.  While the binder I showed was made from thin mahogany sheet, I’m going to illustrated the method using a couple matboard scraps. 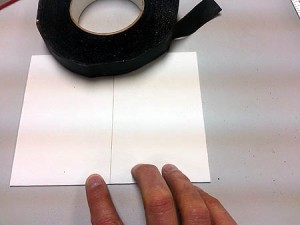 The most popular question I got was “what is gaffer’s tape?”  If, as Red Green says, duct tape is the handyman’s secret weapon, gaffer’s tape is a modelbuilder’s friend.  My bet is that gaffers use it too.

It’s black.  It’s a fabric tape that comes in several widths.  It’s about as sticky as duct tape and it cuts cleanly.  Here it is, with two, notepad-sized pieces of mat board ready to be taped together.

The key to a successful binder is placing the two cover pieces up against one another as in the photo.  The outside surfaces should be facing downward.  In this way, when the book is opened, the two cover edges will butt up against one another, providing a built-in limit for the hinge and a stiff, single surface, just as when you open a game board. 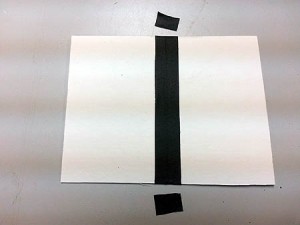 Cut a strip of tape that’s longer than the height of your covers.  I actually attach the tape to the table top just above the covers.  This allows me to hold the two covers together as I pull the tape down across their interface.  Use a razor blade to cut the ends of this tape flush with the cover surface.  DO NOT wrap the tape around to the other side or the hinge won’t work. 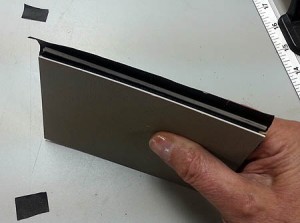 Insert one of your notebooks between the covers and squeeze this sandwich together.  Place a piece of tape along the face of one cover and, maintaining pressure on your sandwich, roll the tape over the hinge point to the other cover, smoothing out the tape on the back cover. 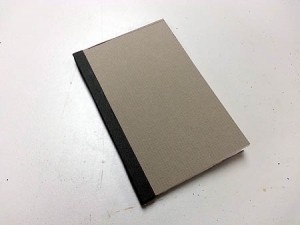 Voila, you’ve got a binder. You’re on your own for rounding the outer corners.  I just used a disk sander on my wooden one but it would be easy enough to cut them.

Now all you’ve got to do is find a notebook that is happy with whatever pointy device you use.  I mentioned last time that neither the Baron Fig or Field Notes notebooks are happy with fountain pen inks, though if you use Microns, Sharpie pens (not markers) or ballpoints, you’ll have good luck, with the potential for a bit of ghosting.  With fountain pens, however, or even using Micron/Sharpies to fill in an area with a dark field of ink, you’ll experience bleed through, potentially ruining the backside of the page.  I thought I’d share some of the tests I’ve done.  Keep in mind these are 3×5 sketches. 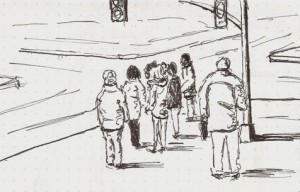 Here are two quick sketches I did of people waiting for the bus.  The one on the left wasn’t too bad.  There was a tiny amount of bleedthrough from one of the dark heads.  For the second one, however, you see that I filled in some areas using the Sharpie Pen and most of those areas showed significant bleedthrough that would prevent drawing on the backside of the page. 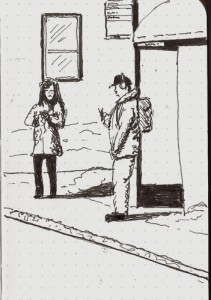 The last example I’ll show you is this skater.  He was on a poster advertising a crazy event they have here called Crashed Ice, where skaters race down a curvy downhill course, complete with jumps and, well..more than a little bit of crashed ice.  You can see a bit of ghosting from the previous page but I don’t find that objectionable for this purpose.  This experiment is interesting because there was no bleed through.  All of the pen work was done using my Pilot Falcon (fine) and De Atramentis Document Black ink.  I expected some bleed through in the cross-hatched areas but I didn’t get any, probably because I didn’t let the pen stop moving.  So I went one step further.  I did some shading with a Tombow water-based brush pen.  I’ve found that water-based brush pens (the brands I’ve used) don’t penetrate the way most solvent-based brush pens do (the brands I’ve used) and I was pleasantly surprised that the Tombow worked just fine in the Field Notes book.

In the end, I’d sure like to find a 70-80# paper staple-bound notebook that would eliminate the bleedthrough problem.  I’m still on the hunt.  In any case, I hope I’ve answered the questions about creating the binder.

One Response to “Making A Small Sketching Binder”