I’d like to begin by thanking all of you who take the time to post your sketches on the internet.  Without them, the last year would have been miserable for me.  I haven’t been able to draw myself and your art kept me inspired and hopeful that I would, some day, be able to return to creating sketches of my own.

Those of you who have followed my blog (both of you) know that I’ve been dealing with some health issues for the past year.  I’m happy to report that I may be seeing some light at the end of this long tunnel.

I’ve been poked and prodded endlessly, CT-scanned, eco-grammed, candy-grammed and other miscellaneous-grams in an attempt to find out why my inflammation blood factors were off the charts.  This has been terribly frustrating and it didn’t solve my problems, which amounted to me having no energy, loss of appetite, loss of 25 lbs, and joints that hurt constantly.  Many days I had a hard time walking but the real problem was that my left hand wouldn’t allow me to draw.

But after they eliminated every disease known to man (the silver lining is that I’ve had the most exhaustive physical imaginable and passed all test(ssssss), I was handed to a rheumatologist, a wonderful woman who is now my hero.  We spent two hours together as I received more prodding and a lot of joint squeezing, bending and stretching.  By my estimate a gazillion questions were asked and answered.  Then it was time for a cortisone shot in my particularly bad knee and fluid was drained for analysis.  Oh…and drugs were prescribed to knock down my general inflammation.

Roughly two weeks later, that’s working.  The annoying cane I’ve been hobbling around on is starting to collect dust and my hand(s) are getting so I can think about drawing again.  I still have a hard time using my thumb in any way to hold a pen though.  I’ve been drawing endless numbers of circles and ellipses in an attempt to eliminate an almost lumpy nature to those objects as I try to find a pen I can hold so those glitches don’t occur while I draw.

I’m also dabbling with painting shapes/volumes and relying less on line to sort of skirt around these problems, though I’m horrible at it and still confess to enjoy pen driving too much to be happy with that approach.  Nevertheless, my energy has returned, I’m walking and I’m ready to fly.  Yvan and I are heading for a sketching session Monday morning and I’m quite excited about it.

I’ll leave you with this simple, poor drawing of an onion.  I did a simple, lumpy outline and then did the paint, adding some more lines when everything was dry.  It was done in my quick-sketch (ie – cheap) notebook and it was like painting on a blotter but I enjoyed the fact that shapes were being made, which is the important thing. 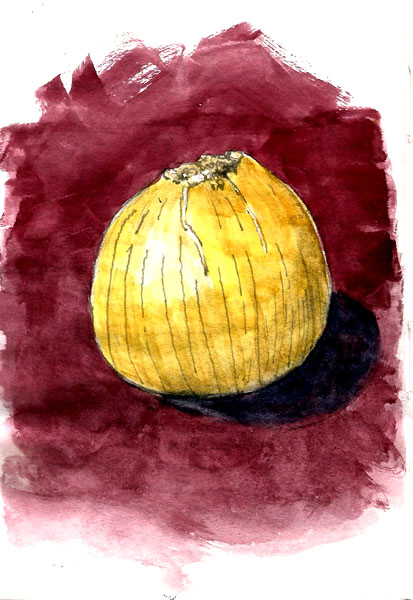 29 Responses to “Learning To Draw Again”