Yvan and I agreed to go to the museum Tuesday morning.  Both of us knew that it was spring break for the kids of Quebec but neither of us knew that this particular Tuesday was also “free” day.  When I arrived there were hundreds of people in the lobby.  So many, in fact, that I didn’t even wait to check my coat because the line was too long.  I just headed upstairs to the Egypt exhibit.

Realizing that the place would be crowded, I found a place where I had the side of a glass case at my back and a clear view of a statue and set up to sketch.  I spent the next hour or so in that one place, sketching one statue.

But the sketching was the least important activity; I talked to kids.  I love kids when I’m sketching.  It’s hard to concentrate on drawing and my sketches sometimes suffer, but I still love them.  They’re so inquisitive and I never have to listen to them tell me that they wish they had the talent to draw or that they’d love to draw but they just don’t have the time.  Kids are the opposite of adults.  For them, drawing is KOOL.  They do it too.  They’ll tell you what they like to draw.  They’ll tell you that they like your drawing.  They ask about my pen.  A couple asked how long I’d been working on the sketch.   But mostly they just stood around watching, at least until their parents came land hauled them away.  Many of them dragged their parents over to see my drawing.

And on this day there were kids everywhere.  I’ve never seen so many people at the museum.  There were at least half a dozen kids around me at all times and I spent more time chatting than drawing.  It was a lot of fun.  As I packed up to leave I got to see what was really going on behind me.  The exhibit room looked like a rock concert.  People everywhere and as Yvan and I left we found there were lines of people waiting to enter the exhibit.  It was extraordinary, but I had to wonder if I could have found a place to sit if I’d wanted to draw something else.  I’ll never know as we left with smiles on our faces.  Here’s the sketch I did during “free” day. 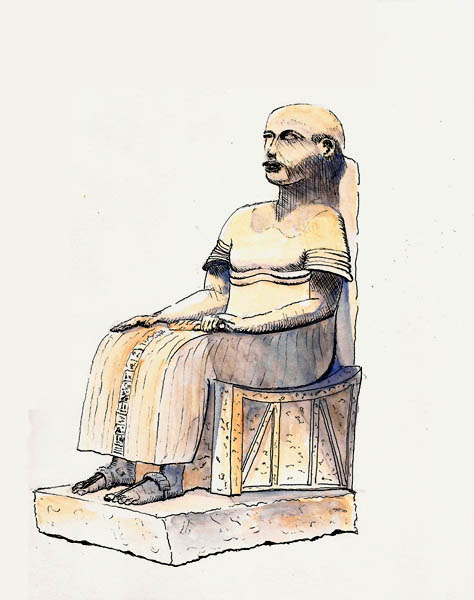