My new favorite store is Notabene, in Montreal.  I’ve talked about it before but today I want to show you a pen I bought there back when Liz Steel came to Montreal.  It’s the Kaweco Lilliput in aluminum.  You can buy it in brass and, I think, copper but the aluminum one is so light that I just had to go down that road as it suits my arthritic hands better.

To look at it though, you have to wonder whether such a tiny pen could be useful for sketching.  I’m here to suggest that it has both advantages and disadvantages as a sketching pen, but I’ll sort of give away the punch line by saying that I’ll probably be using this one a lot this winter.

When it’s closed up, it’s really tiny, measuring only 95mm long and about 7mm in diameter.  Drop it in your pocket and you won’t even know it’s there, which can be good or bad depending on your view. 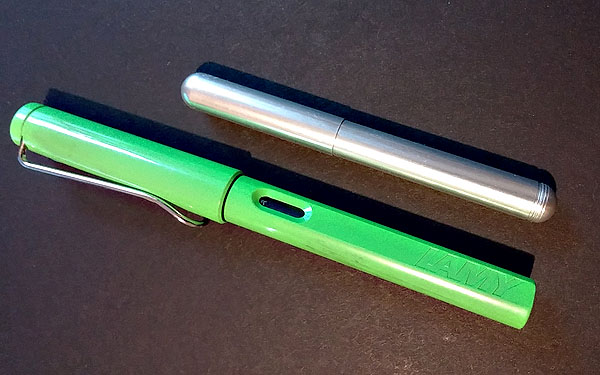 When open, however, it’s every bit as long as a Lamy Safari so you feel like you’re holding a real pen, which you are. 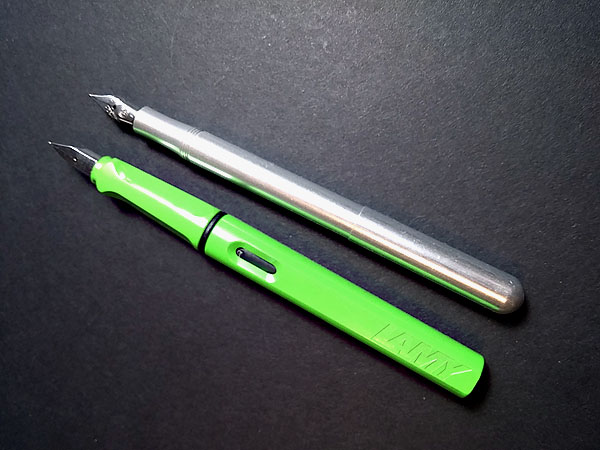 While the Safari weights 18g, the Lilliput weighs only half that (9g).  A feature I like as a street sketcher is the ability to post the cap and the Lilliput allows that like a champ since there are threads that let you screw the cap to the end of the pen.  Works great every time.

This is an area where pros and cons are dependent upon a person’s needs.  The Lilliput takes standard pen cartridges.  This translates directly to having a large number of inks available from a number of manufacturers.  Kaweco themselves make a bunch of them, including a really nice black and an equally nice gray that I’ve tried so far.  The downside of standard cartridges is that they hold less ink than, say Platinum or Pilot cartridges. Another downside of standard cartridges is that none of the truly waterproof inks come in that size cartridge, though aside from Platinum, that’s true for all of the cartridge formats on the market.

Kaweco makes a converter for this pen but by all accounts it’s a miserable design that doesn’t work well and actually holds less ink than do the cartridges.  I don’t find any of this a drawback as I can fill standard cartridges with any ink using a pen syringe, which is how I fill all of my pens anyway.

So how does it perform?

I bought the fine nib.  Kaweco also sells it with heavier nibs and even an extra-fine nib that is so fine that I didn’t see it as practical.  Here’s a quick comparison of Kaweco fine and a Lamy Safari extra-fine.  I tried hard to get this graphic to display in the size/contrast of the actual linework but I suspect it will display on most computer screens larger than it exists on paper.  Performance while inverted is excellent, by the way, and it doesn’t seem to dry up like many pens when used in this way.  You can see that Kaweco Fine nibs are fine, like most Asian fine nibs. 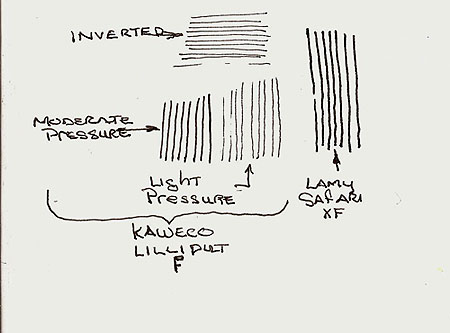 I started using this pen with a Kaweco Stormy Grey cartridge.  I decided that it wasn’t dark enough to make me happy so I switched to Kaweco Pearl Black.  Both of these inks performed well in the pen, though I noticed that the pen writes a bit drier than my Platinum and Pilot pens.

Then I filled a cartridge with Platinum Carbon Black.  This worked ok for a while but fairly quickly, the dry-writing fine nib and pigmented ink combination created some starting problems, though once started it seemed to work ok.  I really hate that, though, so I don’t find PCB a suitable ink for this pen.

I’ve tried my diluted version of DeAtramentis Document Black ink and that works great.  Just for this review, I ran some Noodlers Black through the pen.  This works fine too for those of you who find that ink suitable for sketching.

What I really like about the pen is the ability to start a sketch with very light, sometimes intermittent lines if I use a very light touch, and then, as the sketch develops, I can add emphasis and contrast by applying a bit of pressure.  Coupled with its light feel, it’s ideal for quick-sketching people.

So, is it a good sketching pen?  If you love big, heavy pens, absolutely not.  If you absolutely need to use Platinum Carbon Black rather than alternatives, I don’t think so.  If it’s going to be your only pen, probably not.  But this pen is now part of my arsenal because of its light weight and small size and because it opens into a full-size pen that feels good in my hand.  Here is a doodle page from my testing. 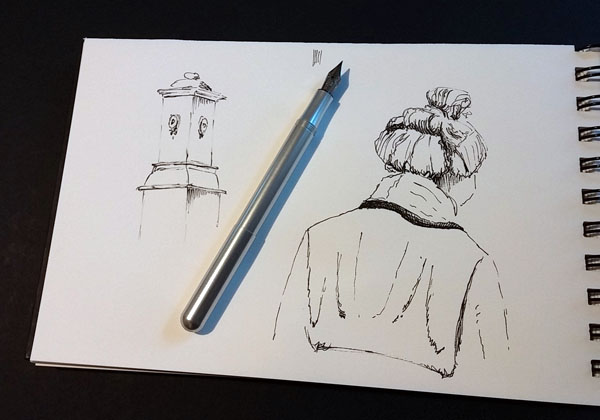