When you are as old as I am, birthdays aren’t a big deal beyond preferring them to the alternative.  But when I can say “I’m Four Years Old,” well that’s better, and I’m now a four-year-old sketcher.

I can’t really say what day it was that I read Danny Gregory’s Everyday Matters and bought into his notion that the value of art comes from the doing of it rather than the end product, but it was sometime in September of 2011.  At the time, I couldn’t draw anything.  I’d been told when I was a kid that I had no talent for art and I’d spent almost 60 years believing it.  Times change and now I don’t believe that “talent” has anything to do with it, though if persistence is a talent maybe there is truth in “you’re so talented” as I’ve been persistent if nothing else.

Anyways, back then I started drawing cubes… lots of cubes.  I figured that lots of things fit into cubes and so if I could draw cubes in any orientation, I’d have a good start on drawing pretty much anything.  And you know what, I think I was right.  Books told me I should also add spheres, cones and cylinders to the mix but otherwise, I started to build a foundation for drawing.  I got pretty myopic about it too, worrying only about the drawing, using paint like crayons and not giving it much thought.

Sadly, I don’t have any of those pages of cubes.  I was using photocopy paper and throwing everything away.  It wasn’t until I posted a couple simple sketches in a sketching group and mentioned my circular file approach to storage that someone said, “Hey, hang onto that stuff.  You’ll want to look back on it some day.”  And so I started my first sketchbook.

By this time I’d heard about urban sketching and that looked like a good idea to me – all except for that going out in public to sketch stuff.  That sounded really scary!

But I was determined.  I took a small 4×6 sketchbook, with horrible paper, and headed to a shopping center.  I’m an analytical type and I reasoned that if I sketched a manikin she wouldn’t get mad at me and I wouldn’t have to worry about her leaving.  I was right on both counts. 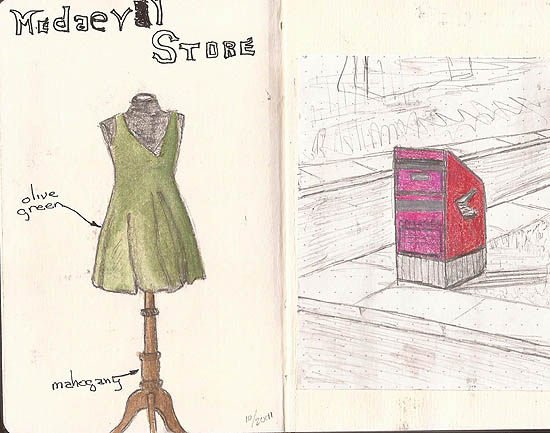 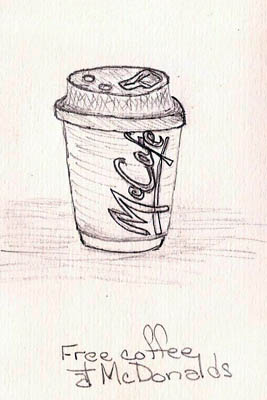 It was still scary, though and I held my sketchbook close to my chest, drawing as quickly as I could in the hope that nobody would see me.  Once again, the strategy worked and I finished the sketch, got up immediately, and walked away.  It was only in hindsight that I saw the reality.  Nobody cared what the heck I was doing.  Everyone just walked by, too busy in their own affairs to care about me and my manikin sketch.  My second ‘urban sketch’ was a post box and it didn’t get angry either.   But I got “bold” and soon I was sketching my coffee cup in the middle of McDonalds (grin).

By this time I was 1) having a great time sketching, or trying, anywhere I wanted.  It doesn’t take long before you figure out that nobody cares what you’re doing and the fears are unfounded.  My only limitations were, and still are, my ability to draw and paint.  But I wanted to draw buildings and so one day I bit the bullet and drew this one, my first location sketch of a building.  Since then I’ve done, literally, thousands of sketches, almost all of them done on location.  I’ve filled more than 40 sketchbooks.  I think I’m a little better at sketching than I was when I started but that doesn’t really matter.  I’m having fun and it’s become a part of my life. 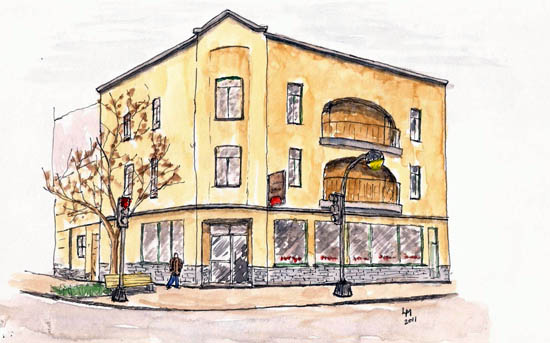