The prime directive for our family these days is walk, walk, and then walk some more.  Chantal has decided she needs to get more exercise and when she decides something, the actions are never small.  Me, I’m trying to learn to walk again.  I’ve spent nearly four years with knee pain and a limp that just got progressively worse.  Now that my operation is behind me, and COVID is being fought off by a successful vaccination program in Quebec, it’s walk, walk and then walk some more.

While stomping around the local neighborhoods provides the required steps, it lacks variety.  So, we decided to “go somewhere.”  I put that in quotes because we’ve forgotten how to decide things like where to go when you want to go somewhere.  But I got the bright idea for us to head to Chicoutimi, Quebec, a smallish town northeast of Quebec City by a couple hours.  I did the obligatory query to Mr. Google, found several parks there that would generate some steps and allow for a picnic and off we went.

As it turns out, Chicoutimi is a pretty nice place.  They have a boardwalk/park system that runs along the Saguenay fiord that is simply marvelous.  I could have spent several days sketching in this one place alone, but all we did was walk, walk, and then walk some more.

We late lunch at an idyllic park associated with a Chicoutimi landmark.  It sits below “La Maison Blanche,”  no relationship to another White House you might know.  This one is more akin to the Little Engine That Could.  You see, part of Chicoutimi history is a 1996 flood caused by lots of rain, a dam failed and mountains of water flooded into the city, literally removing the core of the town.  The recent floods in Germany are probably a good comparison.

Anyways, for some reason, a tiny house that had sat in the same place for generations remained, by itself, in the middle of the town.  It was damaged but it had survived.

It was decided to restore it as a memorial to the flood and the people who had lived there.  It now sits in its original place, with artificially induced waterfalls on both sides and with water being pumped from the doorway as though it were still being flooded.  Inside is a small museum and overall the place is a delight.

This is another place where one could draw forever but I only had time to do one sketch while we ate lunch in the park below the site.  Hope you like it. 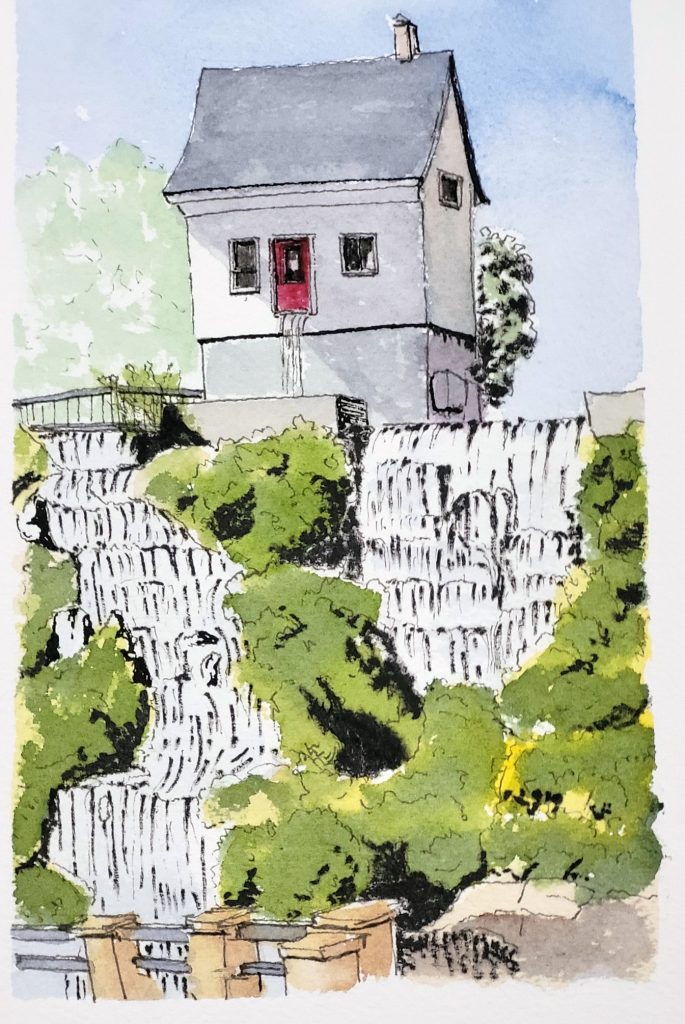 2 Responses to “Hiking The Parks Of Chicoutimi”