Can you have a group sketching event without a group?  I wonder.  This was attempted, it seems, last Saturday in Quebec City.  According to the published schedule of Collectif des ateliers libres en arts visuals de Québec, a local portrait group, we were all supposed to meet on Terrace Dufferin at 10AM.  I was there.  Yvan was there.  But nobody else showed up, not even the guy who was supposed to coordinate the event.

So, our group was small, but our will was mighty.  It was a very hot day, one of the few we’ve had thus far but Yvan and I found some shade, sketched and enjoyed each other’s company.

I need practice drawing stuff where I have to look up and so I did a sketch of the old postal building that sits at the end of Terrace Dufferin, with a bit of an information kiosk in the foreground.  It’s an odd view and only part of the building but it turned my crank so I put it to paper.  All in all, we had fun, though this is tourist season and we sort of got overrun. 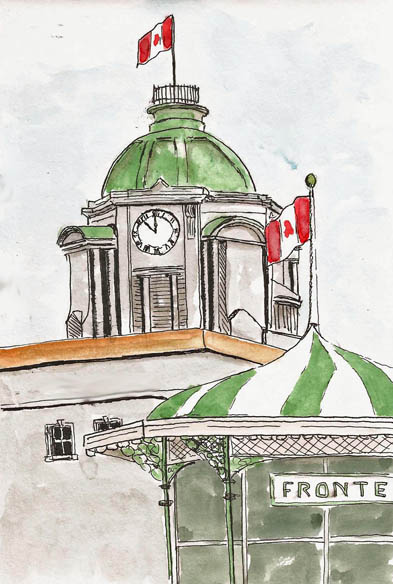 One of the really fun things about being a street sketcher is the audience, particularly the kids.  Kids are curious about anyone who draws.  They relate to it.  Kids are also afraid to engage with adults so they have to be invited, with smiles and words.  I smile.  I say hi.  And before you know it, we’re engaged in conversation and they are a breath of fresh air.  Unlike adults, they don’t tell you you’re sooo talented.  They don’t tell you about how they’d like to do art but they don’t have the time/patience/ability.  Instead, they tell you that they draw too.  They ask you if you like it.  They want to know how the paint thing (waterbrush) works.  Maybe I like them because I think about art on this level.  I don’t know.  I share with you a photo of me interacting with some kids on this day.  I didn’t know Yvan had taken this photo but I’m grateful that he did. 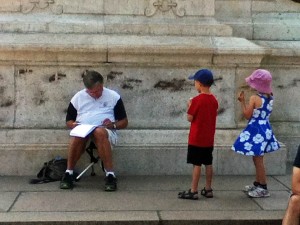 2 Responses to “Group Sketching Without The Group”