We can look at the world as a bunch of contour lines, a bunch of interlocking shapes, or a set of 3D masses as we create our art.   Many may view the world as a melange of these three points of view, but then emphasize one or the other as we put the scene to paper.

As a pen guy I have most experience with contour, but the more I sketch the more I envision the world as shapes and masses, converting them to line in my drawings.  I’ve tried, on a couple occasions to draw using shapes laid down directly with watercolor, but my watercolor abilities are very limited so, for the most part, these experiments don’t work out that well (grin).

But recently we were in Rimouski, Quebec and I took some photos, one of my daughter sitting on a pile of rocks exposed during low tide.  I decided to sketch that photo and tried to capture it as color shapes, adding some pen lines after the fact.

At the outset I believed this would result in a much looser sketch than my typical pen drawing but I was mistaken.  Seems I look at shapes as having the same hard edges as a typical contour drawing.  More surprising, though, was that my ‘calibrator’, the sense of the size of things, is a bit off when I pick up a brush and everything in this drawing is larger than it should be.  My daughter looks huge, as does her hair.  I found that interesting because I thought I was being very careful with proportions when laying down the shapes of this sketch.  Silly me.  I wonder why. 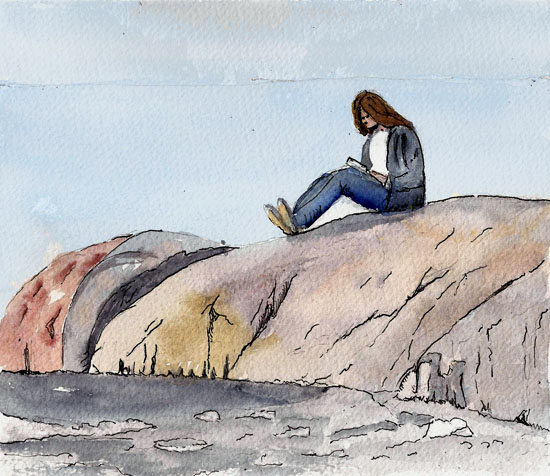