I decided to learn to oil paint principally to get myself working in a medium that didn’t rely upon line for its information.  Why?  Because most sketchers are like me.  We go out, pen in hand, and draw stuff.  If we also use color (typically watercolor) we do so “after the fact.”  It’s common for people to say “I’ll add color later.”

This is fine and makes many of us happy but this approach causes us to draw without thinking of tone and any thoughts we have of three dimensions come in the form of perspective lines, object overlap, etc.  Again, that’s fine but these approaches don’t do much to teach us to see and produce value, and because of the ‘later’ aspects of our color approach we’re mentally reducing everything to two dimensions as we draw and, for many of us, the third dimension is, at best, handled by some general tone variation when we add color.

And so I thought the switch would force me to get into values and form more.  Unforeseen was my complete ineptitude with respect to using a brush to draw my oh so limited understanding of color mixing and a whole bunch of other stuff. 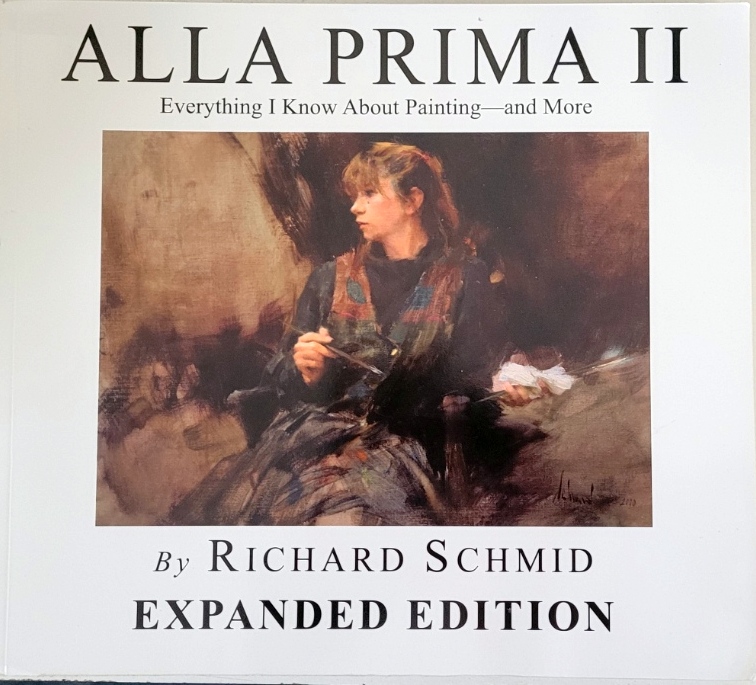 I bought this book, a book you come across everywhere you look when listening to oil painters.  It’s an oil painter’s bible.  Alla Prima’s reputation is well-deserved.  I have a fairly large library of art books (around 300 at least count) and this one has become one of my best.  Unlike the typical hobby books, this one is packed with into on everything oil paint, and as its subtitle says …and more.

One of the things contained within it is a suggestion for learning color mixing and to gain fluency with your own  colors.  I confess that I’m not a “swatch” guy.  I hate this stuff and, with watercolors I’ve always found it lacking because it’s so hard to know what you’re really mixing because of the watery nature of the medium.  Anyways, Richard Schmid argued that this exercise would make me smart and who wouldn’t want to be smart.

Here’s how it works.  Each panel represents one dominant color.  Each column represents a mixture of the dominant color with one of the other colors on the palette.  Then, with that mix, you do a 5-value chart of that color mix to fill up the column.  Each panel reflects 50 color mixes. I just used the Cobra Water Mixable Oils kit as my color palette and set to work.  It took FOREVER!!!

In doing this, however, I became fluent with the palette knife, learned a lot about the strengths of each color, got pretty good at mixing values and by the end I was able to do this a LOT faster than I could when I started.   Can’t say it was fun but Schmid was right, I got smarter.  I’m still dumb when it comes to oil painting but small steps are the way to success.

Here are all the panels I did to complete the Schmid exercise:

All this mixing got me interested in Anders Zorn’s famous Zorn palette.  He painted almost everything with Vermillion, Yellow Ochre, and Ivory Black.  In reading about him I found that they found Cobalt Blue in his studio so maybe he used that on occasion as well.  I used this as an excuse to add it to my look at the Zorn palette.  Same dominant color + other colors approach applies here but as there were so few colors I was able to do everything on one panel in four blocks of value columns.   It’s amazing how many colors you can get from so few colors.