The Citroen 2-CV (deux chevaux-vapeur), is something of a blast from the past.  While not made in production numbers until after WWII, it was designed in the 30s to move a couple adults at a whopping 37 mph along French dirt roads.  I don’t know if they ever made it to the US but I never saw one until I came to Quebec and even here, the only ones I’ve seen are display items at a large restaurant.  But they smack of a pre-Volkswagon where inexpensive cars were kept light, low-powered and without power everything.

I went with Claudette to the north side of the city because she wanted to draw a large bear statue.  When we got there I found the 2-CV and knew what I had to do.  The subject I was looking at was painted bright red with white polka dots.  Why they had insulted this vehicle in this way is beyond me but I colored the sketch in more traditional colors. 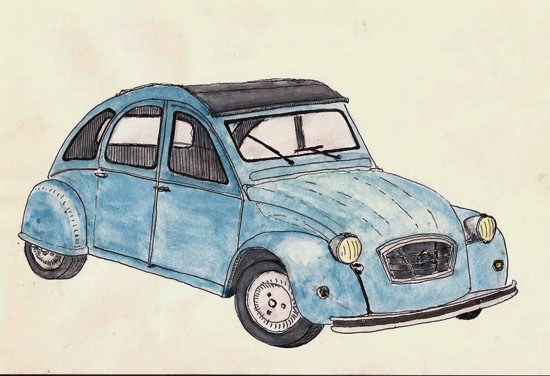