When I came across this house in Quebec City, I had to sketch it.  I wonder if the Russian Czar who must be living there had a pool table under that dome or a ballistic missle.  It didn’t matter; it was just plain KEWL! 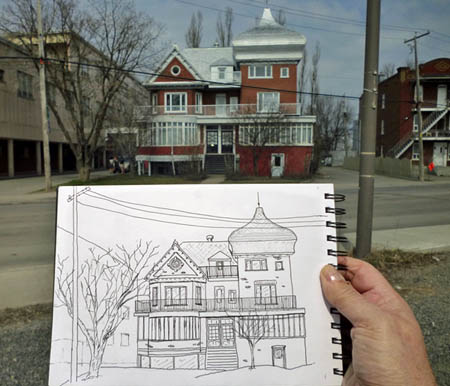 I set up across the street and went to work, sketching the bones in pencil and then doing the ink sketch.  I’m pretty slow as a sketcher and so this took me more than an hour but the time passed without notice.  When it came time for color, the waterbrush came out and… I realized that my watercolors were sitting on my desk at home.  So I shot this photo, packed up, and headed home.

Once at home I vowed to make up a second palette of watercolors so that I could keep it in my sketching satchel.  I had a W&N Cotman Sketcher palette that I picked up on sale and so I popped out the Cotman watercolors and filled the pans with Winsor & Newton artist-quality watercolors.  I’m still experimenting with color palettes and mostly working with little knowledge.  This is what I’m using right now, though. 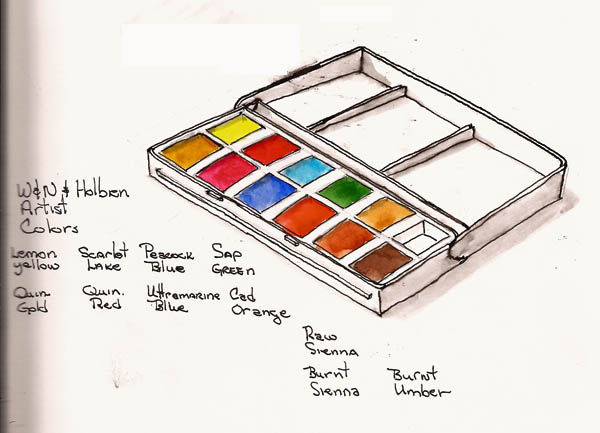 I decided to go light on the color for this sketch; it just seemed to call for that approach, with all the emphasis on the building.  I hope you like it.

It was done in my Stillman & Birn 10×7 Alpha sketchbook, using a Hero 578 Calligraphy pen and Platinum Carbon Black ink.

I’m so excited that it’s finally spring in Quebec City.  I got interested in sketching last fall, just before it started getting cold here, and so I’ve been trying to get out sketching as often as I can.  I may be premature in that because Quebec spring is still pretty cool, and often windy.

A few days ago when I’d made the decision to go sketching.  The temps were just above freezing and it was quite breezy.  But I went anyway.  I headed downtown, looking for something to sketch, my face and ears screaming “Are you nuts?” to my stubborn sketcher brain, as the wind defoliated my skin. 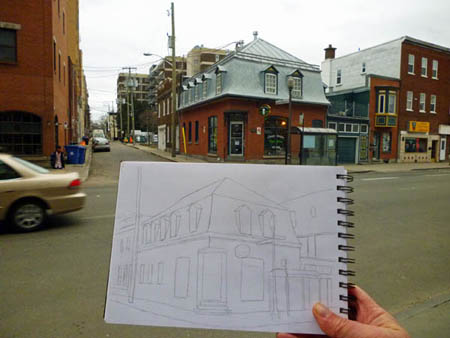 I set up next to a wall that blocked most of the wind. It was across the street from a dental clinic that seemed worthy of sketching.

I start these sketches with pencil and  I have two goals.  I want to get the perspective right and I want to locate all the foreground thingies that determine where the background lines start and stop.  I don’t worry about drawing the details at this point, but I’m slow enough as a newbie sketcher that this takes me longer than it does for most sketchers.  I’d been sitting for about 45 minutes and I was beginning to empathize with popsicles and dream of fireplaces.  I called it a day, packed up, and went home.  This was the state of the sketch at that point.

Later, in the warmth of my home, I inked (Hero Calligraphy pen w/Platinum Carbon Black ink) the sketch, added some details, and used Winsor & Newton Artist watercolors to give it some color.  Hope you like it. 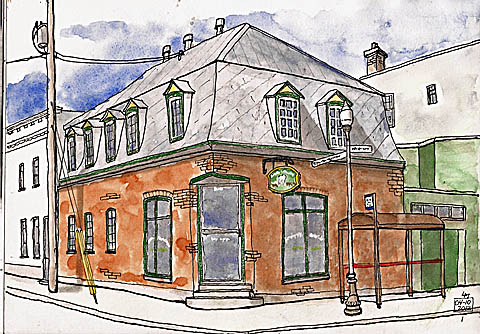 By the way, the more I use it, the more I’m enjoying my Stillman & Birn 10×7 Alpha.  I’ve been using Alpha’s for a while now and love them and spiral format is really convenient for outdoor sketching…even when it’s cold.

I went out this morning to sketch some more.  I headed to the marina, expecting that some of the winterized sailboats would be back in the water.  It was spring, afterall.  Turned out that, once again, I had been overly-optimistic as the marina is still covered by ice.  Spring is here, but not really. 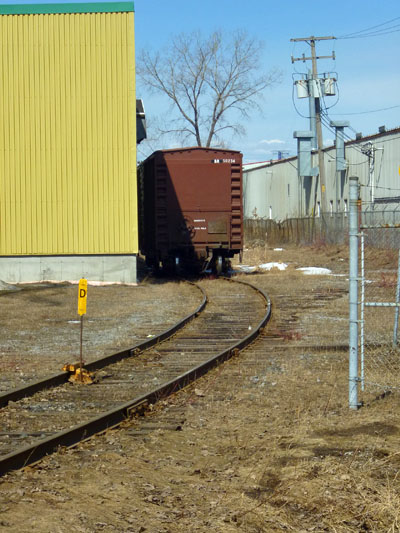 Thursday morning I decided to walk south and visit an industrial area near a railroad yard in Quebec City.  I’m something of a train nut and I thought maybe I could sketch some trains.

I was walking to the freight yard when I happened upon this scene.  I liked the yellow wall, juxtapositioned next to the brown train car and the harsh shadow between them, so I decided to sketch it.

I set up to the left of where this photo was taken, on a sidewalk, with the street behind me.  My WalkStool was actually straddling the railroad track.  Those railroad tracks crossed the street and went somewhere.  I didn’t pay much attention.   I remember chuckling to myself that at least this subject wouldn’t drive away like a car I was sketching earlier in the week.

I was having a really nice time as the sun felt good, it was quiet, and the sketching was going well.  I’m a really slow sketcher so I’d been there more than an hour and I was intently adding color to my ink sketch.

I was so concentrated on the work that I didn’t even hear it… until a guy walked up to me and his shadow crossed my paper.  “Qu’est-ce que tu fait, Monsieur?” (What are you doing, Mister?)   I looked up to see a guy in overalls and a baseball cap staring down at me.  And then I saw IT.  It was an EMD SW-1500 switch engine, idling no more than ten feet from where I was sitting – on the railroad tracks.

I told him I was sketching and showed him my sketch.  I stood up as I did and he told I’d have to move.  As I was packing up he walked over to the derail (that yellow thing clamped to the track), disengaged it, and motioned to the engineer to move forward.

By then I was taking photos of the engine.  I did mention that I’m a railroad geek didn’t I?  Once they’d engaged the boxcar, the guy dropped off the engine, walked back to me, and asked if I could show the engineer my sketch.  I was both amazed, excited, and nervous all at once.  The sketch you see below bought me access to the cab of that engine, which for a railroad geek is a really big deal.  And then they hauled my boxcar away.  And that, my friends is what I call a great day of sketching.

Here’s the sketch.  I still have to add the white letters on the boxcar and I’ll probably do that with a colored pencil.  This sketch was done in my Stillman & Birn Alpha sketchbook (10×7), using a Lamy Safari XF and Platinum Carbon Black ink.  Color is W&N artist watercolors.  Has anything like this happened to you while you were sketching? 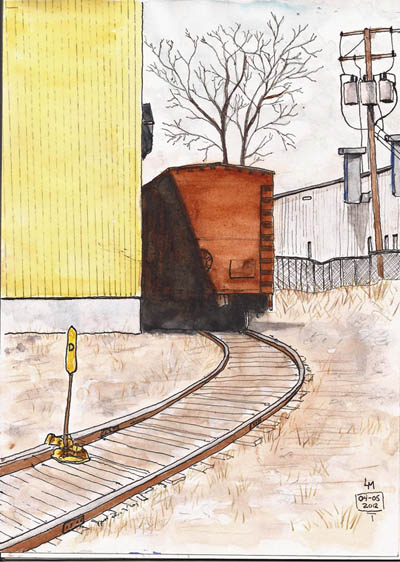 A couple things have happened recently that are causing me to rethink what I post on this blog.  The first was an email I got asking me why I wasn’t posting more of my sketches here.  The other thing is that Facebook is continuing to march out its horrible Timeline format, which makes posting sketches on Facebook very difficult unless you’re happy with postage-stamp size postings.

I started this blog to promote my mystery novels and I’ll continue to use it for that.  But, because I love fountain pens and because I’m learning to sketch, I’ve started doing posts about those topics as well.  As the email suggested, though, I have not posted most of my sketches here.  That’s going to change and while I’m not a prolific as a lot of sketchers, I hope I’ll be posting sketches regularly.  I’d like to hear any comments regarding my art, or what you’d like me to talk about as we head through spring and into summer sketching season.

To start that off, here are a couple of my latest building sketches.   Both were done in a Stillman & Birn Alpha series sketchbook.  I’ve been using these sketchbooks for a while and I love them.  These sketches were done in my new 10×7 (landscape format) spiral-bound sketchbook, though I generally prefer hardbound journals and S&B make some of the best.  But for outdoor sketching I really like the spiral-bound approach as I can fold it back, plunk it on my lap and draw.

This has got to be one of the cutest restaurants in Quebec City.  Everytime I walk by it I think of Gary Larson cartoons.  The stairway of this sketch was the real challenge and having done one, if I’m made king I will ban them from my kingdom.

This is another restaurant in Limoilu, one of the older parts of Quebec City.  You can’t help but notice its colorful facade and this is the second time I’ve sketched it.  I was trying out a new pen, a Hero Calligraphy pen.  Works great but I used Noodler’s Black ink which, in spite of its ‘bulletproof’ label, is not waterproof enough to apply watercolor washes on top of it. 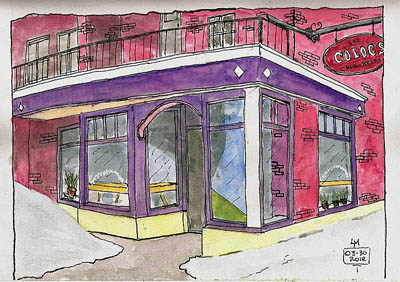 I hope you enjoy these and those I’ll be posting in the future.  Are you as excited as I am that the snow is gone and we can get out sketching again?

Those of us who want to sketch outdoors using pen and watercolor have a basic problem.  How do you carry water without it becoming a burden.  On its face, the problem is pretty easy.  You can always use a waterbrush, but painting with these is not as nice as with actual watercolor brushes.  But lots of people carry water bottles with them, even while running, hiking, etc.  What’s the big deal? 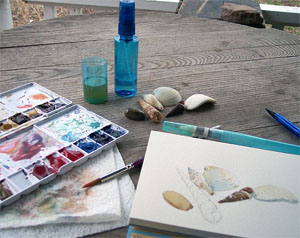 And when you think about it, it’s not the water that’s the problem.  It’s that what we watercolor types want is a, in addition to water, we need a place to dip/rinse brushes and a way to spray the water we carry.

Cathy Johnson, author of Artist’s Journal Workshop came up with a great solution by nesting a small spray bottle in a slightly larger container such that the two nest for travel.

The only problem with this idea is that it’s hard to find bottles that will nest.  Even Cathy has said that she can’t find another set and many of us have been searching for just the right combination to replicate her system. 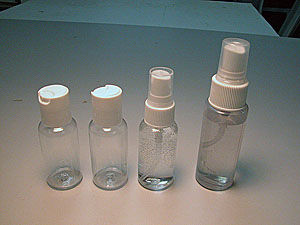 The three bottles on the left are the travel set; the right shows an art store spray bottle

The other day I was wandering through a dollar store, looking for things I could repurpose into art goodies., and I found a ‘travel’ set of bottles.  Contained within it was a small spray bottle.  The best news is that since then I’ve found other travel sets containing the same small bottle so I don’t think this was a once in a lifetime find.  And, to make a long story short, this smaller spray bottle is just enough smaller in diameter that it will nest in the bottom of the ‘standard’ size spray bottle that’s available in any art store. 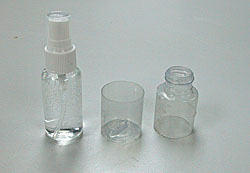 Once obtained, it’s a simple matter of cutting the bottom off the larger bottle.  I then turned it upside down on some sandpaper and sanded the edge smooth.  I do wish I’d cut a bit higher on the bottle you see in the photo.  It would provide more water volume for rinsing a brush.

In the end, I have a great little travel reservoir and spray bottle and, if I like, a couple extra bottles to carry more water.  Hope this helps others who, like me, were trying to replicate Cathy’s system. 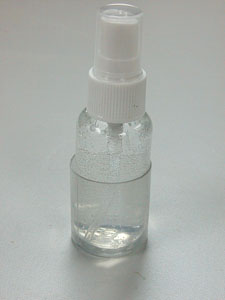