There was a great bagel place in Sillery, a part of Quebec City.  They have an open-hearth wood-burning oven in which they stuff hundreds of circles of bagel dough and pull out hundreds of very tasty bagels.  The process is fascinating to watch (I’m easily amused) and it used to be a really nice, rustic restaurant.

I went there the other day to find that the place had been remodeled.  Same great oven.  Same bagel-making activity.  But the eating area is now plastic and aluminum, with almost nothing hanging on bare walls that go up at least 20-feet to the ceiling.  The result of this huge, warehouse-like space is that anyone talking in the place generates a cacophony of noise as their voices rattle around in the hollow space.

I ate a bagel, drank some coffee, and did a couple sketches but couldn’t take any more so I left.  Sometimes improvements aren’t. 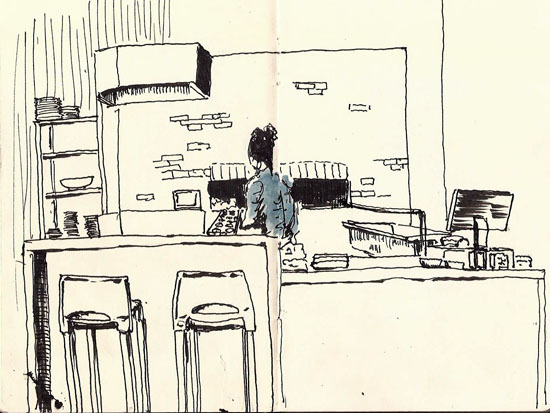