“A Man’s Gotta Know His Limitations” is a famous line by Clint Eastwood in one of his Dirty Harry movies.  And yesterday, that quote came to mind.  I was in the Nigeria exhibit of the Musee de la Civilisation and attempting to sketch a complex ceremonial head dress.  If one squints it looks like the caricature of a rocket ship with a head on the front of it.  If you look at it closely, however, you see that it has a head/face on one end, and another, more stylized face, with a couple of tusks on the other.  These two ‘heads’ are separated by a large, half-disk that holds the eyes of the second head.  It’s about 2-feet long and someone wore it on their head.

I just had to sketch it.  I was in the mood to give a pencil another try, though I don’t know why I punish myself like that.  Pencils and I don’t get along and my results are always smeared by the very action of creating them.  Have I mentioned that I’m a pen guy?

Anyways, there isn’t a vertical or horizontal line in this object but I started by drawing a square, somewhat tilted to reflect the main ‘body’ of the object.  This set the angle for the large plate and that back end that looks like a doghouse. 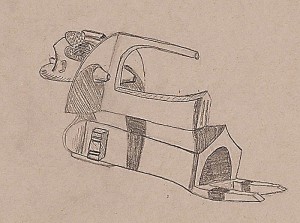 A ball drawn in front of it and a couple sticks out the back and I had the ‘bones’ for this sketch.  I started the actual drawing by doing the measure-with-your-pencil trick to determine what part of this object went through the centerpoint of the drawing and I roughed that in.  Then, he said confidently, the rest was just a matter of filling out/in the bones… and it only took forever and half a dozen Staedtler erasers.  I guess that’s a slight exaggeration – it only felt that way. 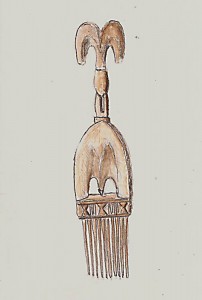 Once I finished this sketch I decided to do something a bit more tame so I quickly sketched this wooden Nigerian comb.  This one was also done in pencil but in my Stillman & Birn Epsilon sketchbook and I added a few scribbles of watercolor pencil.

What object(s) show you your limitations as a sketcher?

4 Responses to “A Man’s Gotta Know His Limitations”