Once upon a time the Field Notes company released an edition of their small sketchbooks called Sweet Tooth and it contained a red, a yellow and a blue notebook as a three pack.  Several of us started drawing in the red ones because it creates a bright mid-tone between our black and white pens.  Tina Koyama has become queen of the Sweet Tooth, using mostly red but sometimes blue notebooks. 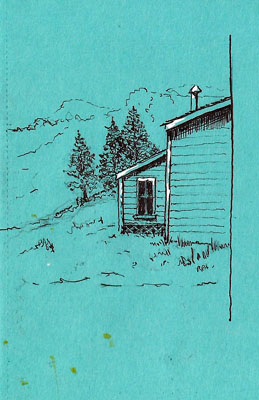 vignette from imagination while watching baseball

Me, while I did some “serious” sketches in a couple red books, I’ve mostly relegated these books to really quick-n-dirty sketches, done while waiting for someone or small sketches from my imagination while I watch baseball.  I don’t scan these sketches as there’s just too many of them, none worthy of consideration but they help train my brain to draw, which is the reason I do them. 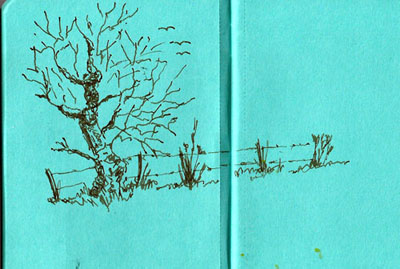 I feel I’ve plagiarized this from somewhere but I don’t know from where. Done from “imagination” while watching baseball 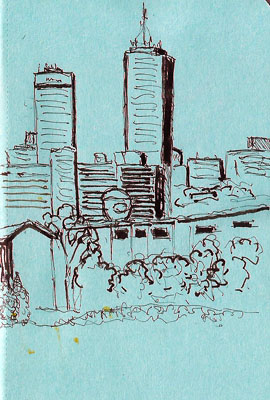 Real quick sketch of part of our skyline

I’m posting a couple of them here so I’ll have an excuse to post a nod to Tina’s ‘abandoned couch’ series.  I was waiting for our gang to show up to draw and across the street was an abandoned couch with a couple matching chairs piled up on top of it.  I thought immediately of Tina. 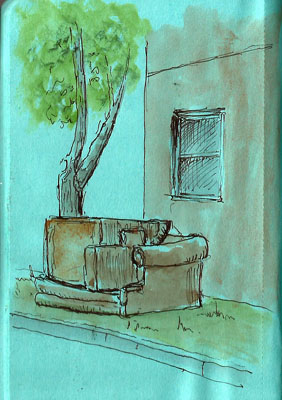 2 Responses to “A Little Bit Of Blue”