Tourists to Quebec City come for what’s contained within the walls of the “old City,” a city that has expanded into a large metropolitan area (7th largest city in Canada) with the central core becoming more of a tourist attraction than a “downtown” area.

As the city grew beyond those walls, the St. Jean and St. Louis “gates” were enlarged so that more traffic could flow in/out of that part of the city and people, living out of town, could get back and forth.

Rue St. Jean and Rue St. Louis were the main thoroughfares for that traffic and very quickly, “out of town” was no longer out of town.   In fact, just west of the old city became the ‘downtown’ area.  It’s where the provincial parliament building stands, where major hotels reside, and, at last count, one restaurant for every citizen.   But one can see that, “back in the day” the prime real estate along these routes was built up by wealthy businesses and people and while many of the stores and nightclubs along these routes are no longer banks and law offices, their architecture smacks of high times.

For a sketcher these older buildings are very inviting as subjects but it’s hard to find a place to sit or stand while drawing them because the sidewalks are narrow and there’s lots of traffic on them.  Still, I venture there sometimes and I managed to draw the upper portion of this stately house last week.

I did it in a 6×8 Stillman & Birn Beta sketchbook with a TWSBI Mini and De Atramentis Document Black ink.  I added some darks with a Kuretake #13 brush pen and Platinum Carbon Black ink.  All of my watercolors these days are Daniel Smith.  Hope you like it. 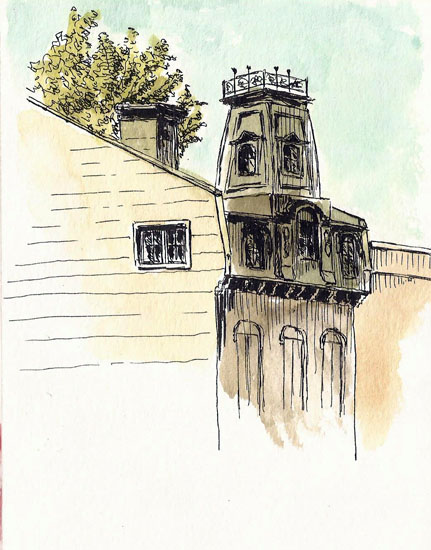