Ile d’Orléans is a large island just east of Quebec City.  It’s farm country and we locals go there to pick strawberries, apples, raspberries, and to buy corn and other vegetable crops when in season.  It’s also a place where sketchers, at least one, spend time enjoying the fresh St. Lawrence River air.

The family piled into the car for a trip there last weekend.  In hindsight we were overly optimistic as it was far too windy and cold to be on the island.  Of course, we went for the ice cream.  There’s a place that dips ice cream cones in very thick, milk chocolate so you end up eating a very cold chocolate bar with a soft center.  What’s not to like.

After consuming enough calories to keep me going for about a week, we headed down the road looking for something to draw.  While it’s not officially open for tourists yet, we ended up at the maritime museum.  There were choices to be made.  Wander around in the cold or sit in the car and draw.  My family chose the former; I chose the later. 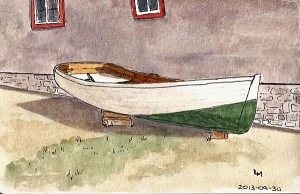 The result of my isolation was 1) my family got very cold and 2) I drew this building which is a wood shop in which many chaloupes (large row boats) were built.  I’ve included a sketch I did in 2013 of one of those boats as well as the building sketch I did this time. 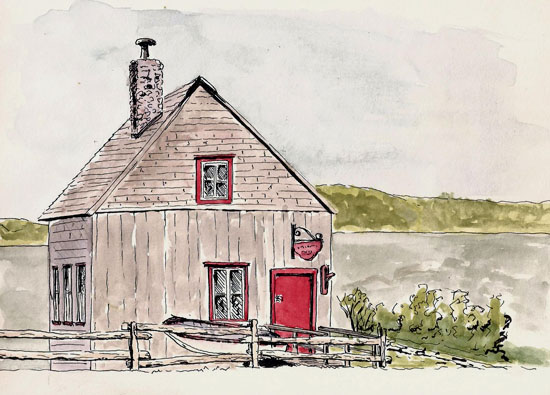