The Plains of Abraham, in Quebec City, is a large area where a guy once had a farm.  Then the Brits climbed the cliffs, shot it out with the French and among other things, they built a large fort to protect the area from those big bad Americans that would soon invade.

They never did but the result is that this large, partially wooded, and well-developed park area is now labelled Battlefield Park on the signs but everyone who lives here calls the area the Plains of Abraham.  It’s our oasis – a place to sit under a tree and have a picnic.  It’s a place to walk through a forest, although it’s really a managed clump of trees by forest standards.  Our art museum is in the middle of the Plains.  When the likes of Paul McCartney comes to town, the Plains are where he sings Let It Be.  Oh, and the Plains plays a significant role in my mystery novel, Her Book of Shadows.

It’s also a place where I go when I’m in the mood to sketch some nature, though more often than not I turn to my favorite subjects, man-made objects.  This sketch is something of a mix but I couldn’t resist this small scene.  After I did the sketch I went to the garden to sketch, but all I did was sit and enjoy the sun on my face and the large array of tulips that were blooming.  Life is sweet. 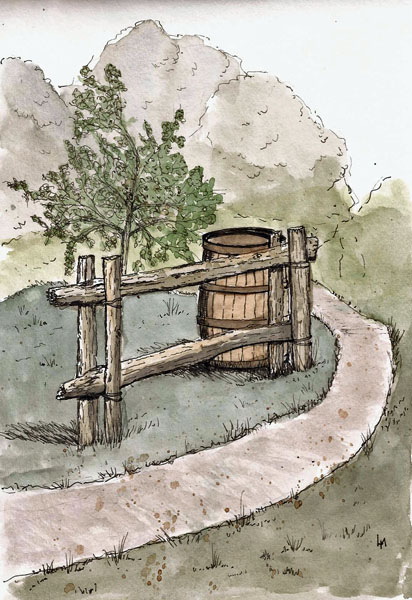