Lately I’ve been talking a lot about the small notebooks I use for quick-sketching and sharing my quest for a notebook that I find useful for that purpose.  For the past couple years I’ve used small notebooks I bought at the dollar store but ever since Marc Taro Holmes talked about using a Moleskine cahier (the staple-bound books) I’ve been looking for something in that format, after finding the Moleskine notebooks to bleed/ghost more than I like.

All that talk – that quest – caused a couple people to ask, “Why do you use the small book rather than one of your larger books?”  That seemed like a good question so I thought I’d talk about that a bit.

Mostly, it’s about time and convenience.  When I grab one of my Stillman & Birn sketchbooks, it’s generally because I’m going to spend at least half an hour on a drawing and often the result has taken me an hour or more.  It’s very rare for me to spend more than 15 minutes on a sketch in my small books and most of the sketches I do in it take 5 minutes or less.  At times I’ll try to sketch moving people and spend no more than a minute per sketch.  They’re also small and I can stuff them in a pocket so they’re available at a moment’s notice.

But it’s more than that.  I treat these smaller books very casually.  I’ll do ink and pen tests in them.  I’ll write notes, make lists, or someone’s phone number or web address.  While watching baseball I’ll fill pages with partial sketches of baseball players.  I’ll practice drawing ellipses, spheres, etc.  I’ll draw random shapes and then hatch-shade them.  In short these little books are a training ground for me.  I’ve always thought it odd that people seem to believe that you learn to draw by only doing complete drawings, as though one learns to play the piano by playing Rachmaninoff concertos.

More important than all that, though, is that I use them continually.  If there’s truth to having to draw a million lines before starting to create decent art, I’m playing catch-up.  I draw whenever I have a few minutes, no matter where I am.  Because of this, I’ve found there’s a middle ground between finished drawings and quick scribbles and I use these books for the middle ground as well.

If I’ve got a few minutes to draw I’ll find something small and draw it, at least as much to hone my hand-eye coordination as anything else, but mostly I do it cuz it’s fun.  I thought I’d show you a few  examples, though I did show a few in recent reviews of the small notebooks.  The tan sketches are in my “mustache” book and the white ones are in the new Field Notes Workman’s Companion notebook. 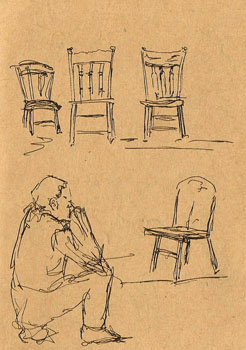 Some chairs and a guy. 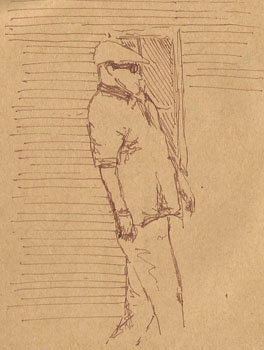 This guy walked by my house, very slowly, very deliberately. Odd gait but I probably exaggerated it. 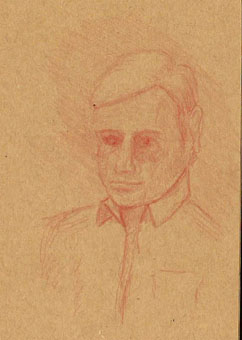 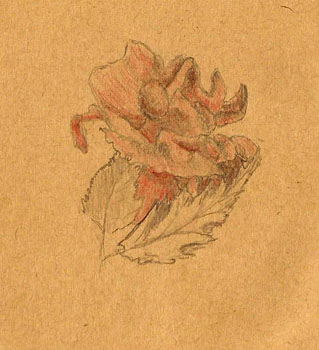 While sitting on the back porch

Recently I reported on an Urban Sketchers event at the Stewart Galleries in Montreal.  I presented a sketch that I did there.  But I do other, little sketches, at these events.  Here are a couple done at that event. 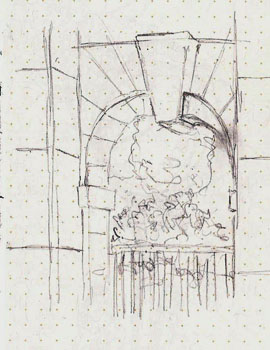 Archway onto a patio at Stewart Galleries. Drawn while Yvan and I ate lunch (pencil) 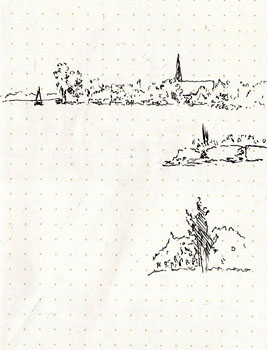 Tiny pencil vignettes done while at the Stewart Galleries

As you can see, these sketches reflect a variety of subjects and have been drawn with different pointy devices.  Each, I hope, improved my ability to capture the world around me.  Mostly, though, they represent precious minutes of fun.

6 Responses to “What Do You Draw In Your Scribbler?”