We gathered at Quebec’s Place d’Armes to sketch the large fountain, or at least the statue that stands atop it.  For some reason I just wasn’t in the mood.  I’m not sure if it had to do with the subject or my new obsession of sketching in these small, mustache notebooks and their toned paper.

In either case, I decided to continue experimentation with that book, trying different approaches.  I turned my attention to one of the buildings.  I had luck adding a bit of color previously so I thought I’d see if I could use my waterbrush with dilute ink in it.  It worked better than I thought and I’ll use this technique again.  No ghosting or bleedthrough on the back side. 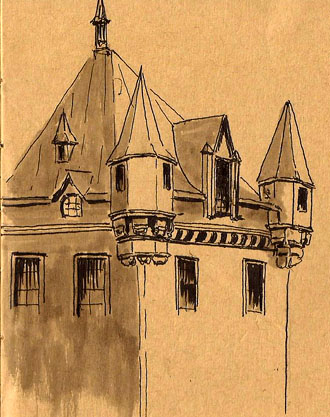 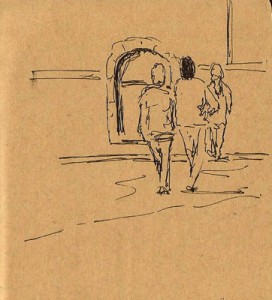 At this point the sun left us and I was wearing shorts and a t-shirt.  I’ve been amazed at how much being cold has a similar effect on my desire to sketch.  What happens is that my attention span goes to near zero so I cope by doing a lot of really quick-sketches, just trying to grab proportions of the people walking around.  I won’t bore you with a bunch of scribbles but here’s an example of people walking across a street. 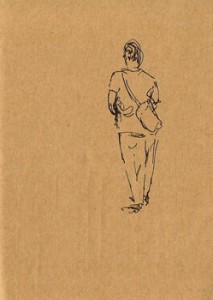 I’ll include this one too as it’s an example of what happens when you decide to draw a guy standing, while talking to a couple people sitting on a bench. I was a minute into this sketch when the people stood up and the three of them walked away (grin).  It was time to turn the page and I did.

Once the statue sketchers had finished, it was decided that we’d head to another location to sketch the bust of another guy.  At least the sun had returned. 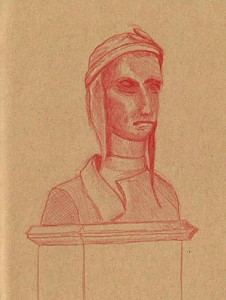 I still wasn’t excited about sculpture sketching and I continued to work in tiny format.  It was an opportunity to try red lead in a Pentel Kerry 0.5mm pencil.  I did the sculpture sketch quicker than I should have and I generated a head that was too tall, but it gave me time to do a second sketch of a hotel entry on the other side of the street.  It was fun and, once again we had a great time. 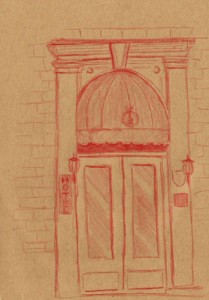