Summer means a lot of walking for me.  I’ll regularly walk a couple hours a day and often those walks take me to the largest park in Quebec City, Battlefield Park, or what most still call the Plains of Abraham, after a farmer who tilled the area before British and French soldiers stomped around in the fields.

These days, the park is more tranquil, with rolling hills, lots of grass, lots of shade trees.  Oh…and lots of stuff to draw, including this building, which serves as something of a service center for the park.

While I was drawing I was approached by a tourist from Peru.  We tried our best to have a conversation but my Spanish is worse than my French and English and so we were limited, mostly,  to smiling at each other but somehow we managed to communicate.  Where there’s a will, there’s a way.  You meet the nicest people while sketching. 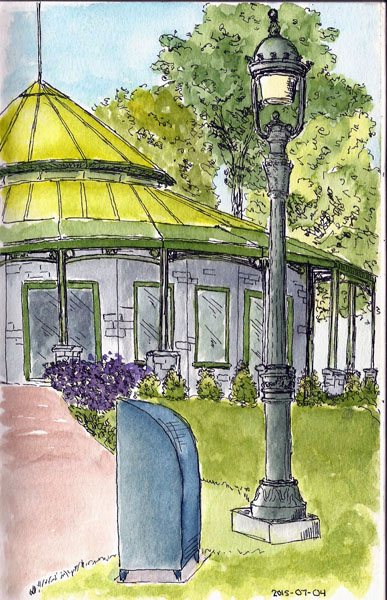