Studio artists get their enjoyment from two sources.  They can enjoy the creatiive process or they can enjoy the creation itself.  Urban sketchers enjoy these things too but for them there are other options.  Maybe it’s a special place or just a nice, sunny day that brings them joy during a sketching session.  Maybe it’s the comaraderie of drawing with a group of friends.  But sometimes the most enjoyment comes from the people you meet.

That’s how it was this day as I was wandering around Quebec’s port area.  I sat down to do a quick sketch of a guy who was fishing.  In my mind it would be a quick, inconsequential 2-minute sketch, maybe less.

The young fisherman had an even younger person hanging out with him.  The little guy saw me as I began the sketch and came over to take a look.  He said nothing and went back to the fisherman.  He returned a minute later, looked at my sketch and said, “Il est mon frère!”  He was excited that I was drawing his brother.  He ran back to tell his brother.  Lucky for me his brother was more interested in fish than drawings of himself or I would have lost my model.

The little boy, probably no more than 5-years old, started pointing at the sketch.  “His shirt should be red,” and he pointed at the shirt sleeve.  I was using pen in my cheap book and had no intention to add any color to this little sketch but he persisted.  “The chair is blue,” and he pointed at it.

Succumbing to my audience turned co-creator, I got out my watercolors and a waterbrush.  I plopped some red on the shirt, blue on the chair.  Buoyed by my response he started pointing to other things, telling me what color they should be.  I told him that the paper wasn’t very good for color and he seemed to understand, though I think he was a little disappointed.  But I thanked him for helping me with the drawing and he was pleased.

Saying goodbye, I walked away with a memory of the day I sketched with that little boy. 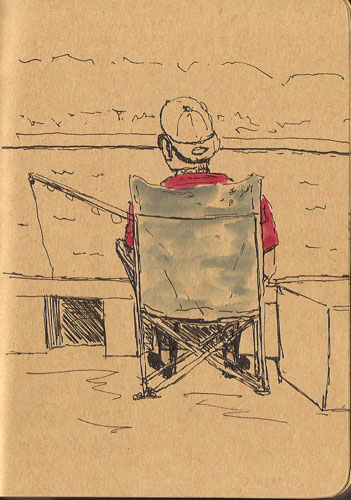